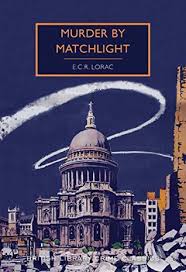 I’ll confess I’ve been sitting on this book for a good few weeks, months even. Why? Was I reluctant to read it? No, quite the opposite. I knew that once I’d read it I’d have to wait until the good folks at the British Library sent me another of their fabulous Crime Classics. So I hung on until I could stand it no more!!

There’s something of the old friend familiarity about these stories with the perceptive introductions by Martin Edwards that have become as much a part of the series for me as the stories themselves. This is my third Lorac and I was pleased to further my acquaintance with Inspector MacDonald whose skill set and acumen increases with every book!

One ubiquitous, innocent bystander witnesses what turns out to be a murder in Regent’s Park. Clues seem to be few other than a visage illuminated by the light of a Swan Vestas match which you can almost smell. But the execution of the murder defies a rational explanation and thus the story unfolds demanding much of its C.I.D. personnel.

A palpable picture of a blackout London during the Blitz adds to the atmosphere and menace of this murder tale leading us down many garden paths before Inspector MacDonald and his able staff guide themselves and us to the correct solution. In fact the atmosphere acts as an additional character for without it things would be more obvious and clear cut.

Lorac’s books are very much driven by skilful characterisations designed to fool both the reader and the police! No one is quite who they seem but all the clues are there if only you can be bothered to absorb every single piece of information and analyse it. The trouble is that so keen is the reader to get to the bottom of the mystery there is a danger of missing a salient piece of data and coming to an incorrect conclusion. That’s part of what makes this story so delightful.

There is a glorious sense of a time and an age, of subterfuge and eavesdropped phone calls, of jack-the-lads and misplaced alliances, identity theft! Don’t let anyone tell you that only happens in today’s cyber times! It could only have ended in murder, surely? Then follows the ingenious and patient policing, cerebral in its execution, so little in the way of forensics to assist the police but if there were there would likely be no real story!! And of course the Blitz makes its presence felt and threatens to hamper the smooth running of the operation.

Thanks British Library Publishing for this book. Thanks for publishing it and for sending me a copy!
Posted by Bookphace at 10:04