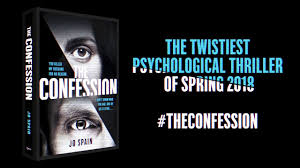 Irish novelist Jo Spain is a new name for me but not one I shall forget in a hurry. For if The Confession is typical of her work then I should set about seeking out her previous novels at my earliest opportunity. This latest story is billed as a debut psychological thriller which puzzled me but I see that Ms. Spain’s previous works seem to be crime stories.

Blurbed as ‘the twistiest psychological thriller of spring 2018’ I am forced to mostly concur with that accolade. The crime and the perp are handed to us on a plate in the prologue of the novel. That in itself can kind of take the wind out of your sails because it isn’t what’s expected. What follows is an insidious stripping of the truth through a skilful and well plotted narrative. There are twists a plenty and more than one flawed narrator.

The story yo yo’s between the past and present and is told through the voices of Julie McNamara wife of the victim, JP Carney, the perpetrator and Alice, the detective who comes across as a sort of Irish Vera Stanhope.

It is what I like to call an onion story where layer after layer is peeled away to reveal fact after supposed fact, detail after detail until you think you’ve figured things out - until the next twist. It's enough to make you cry. 😉

I found it hard to engage with any of the characters but I didn’t think I was supposed to.They don’t behave particularly well to each other. I felt as a reader, I was being kept at arms length emotionally from these people because to get too close to them would be bad for my health! In fact some of the lesser characters elicit more compassion from the reader and if that is intentional it is very cleverly done.

Jo Spain writes with an easy, accessible style, despite the subject matter of the story, so paradoxically it’s an undemanding and pleasurable read.  It’s a fishing rod book where you are given the bait and reeled in, very slowly, completely hooked. And there’s nothing you can do except to read it! Many thanks to Quercus books for giving me the opportunity to do just that.
Posted by Bookphace at 15:59