The Book of Wonders - Julian Sandrel 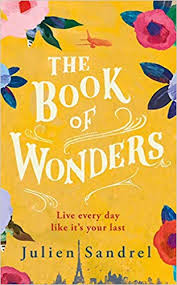 There was a point whilst reading this that I feared it might disintegrate into saccharin sentiment but thankfully it avoids that trap. Something about it reminded me of Jonathan Safran Foer’s Extremely Loud and Incredibly Close and I also thought about the late Stephen Sutton and his bucket list.
Without offering any spoilers, briefly, Thelma’s son Louis (Thelma and Louise, yeah I know, but, please - read the book before you judge) has an accident and is in a coma with no assurance of survival. From his bedroom Thelma finds his book of wonders  which is a kind of reverse bucket list - things he wants to achieve in his lifetime. Because he can’t she tries to, and that’s what the book’s about.

It’s a charming book. It’s ultimately uplifting. To a degree it’s predictable but, as a reader, you actually want it to be, no, you NEED it to be. I found that quite unusual. As with any translation the nuances of language can evaporate and subtler meanings can get lost up to a point. So it tends to read as straightforward story telling and it’s up to the reader to access any sub text.

It will resonate with any parent of a teenage child and maybe cause them to reevaluate? Think about the relationship, things said and unsaid? It’s a sad book in many ways but there is enough humour to balance it out. And the diversity of Louis’s desired activities do temper the severity of his physical situation.

It’s a story of what someone goes through when the unexpected and devastating occurs. How you deal with it, how you think and feel about it and how you reconsider your relationships in the event of potential tragedy. And you learn a lot about yourself in the process. And you grow and you look at those aspects of life that are the really important ones.

It’s a relatively short book but the characterisations are immediate and you get a real sense of Thelma and where she’s at. The book is her story really and the other characters including Louis are secondary but with enough substance to render them believable.

It’s a dual narrative but with most of the story from Thelma’s perspective. An epistolary ending that only just works in my opinion. But I’m not sure what other options the writer had in order to maintain the integrity of the story as a whole? So on that basis it works perfectly.

Ultimately it is a book about love. And that’s always a wonder, isn’t it?

My thanks to Milly Reid at Quercus books for an advance proof of this story.