The Office of Gardens and Ponds - Didier Decoin 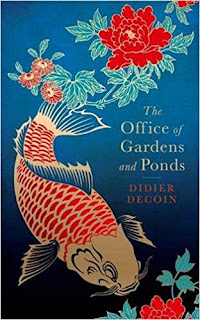 Beautifully translated by Euan Cameron this captivating story transports us to an almost otherworldly Japan with this tale of Miyuki, a bereft widow, who has to transport her deceased husband’s catch of carp to the Imperial Palace. To do that requires an arduous journey; a journey that soon becomes metaphor.

I don’t want to ‘carp’ on about it but the symbol of the Koi is important in Japanese culture and beyond, embracing such virtues as spirituality, knowledge, longevity, loyalty, and wisdom. And especially the black carp symbolising love and overcoming adversity. Are there black carp in this tale? Maybe. Best you read it and check.

With a sub text in the penultimate sequence that almost gives Patrick Susskind a run for his money this story offers us a fairy tale like evocation of the protocols of courts. ambassadors and rituals with a subtle, almost imperceptible humour as backdrop. The final denouement is practically apocalyptic in its intent and creates a dystopian type finale to a carefully crafted story. There’s something of the musical symphony as the different movements of the novel fuse together with a defining crescendo.

According to the cover blurb it took Decoin fourteen years to write. I imagine in part that’s because the amount of research required to create this authentic portrait of an ancient Japan must have been immense. But it’s so thorough and so believable. The narrative flows in that encompassing way that natural storytellers achieve with a plot that is yin and yang in its simplicity and complexity.

Characters are subtly created and developed with the nuances of themselves and their ethnicity merging to offer the reader a rounded and pictorial experience.  Miyuki in the starring role is both resourceful yet humble, innocent yet wise, she never loses her dignity, no matter what situations she finds herself in, nor the defining love she has for her dead husband, Katsuro. It is to her that the reader’s allegiances are directed and we go willingly. Images and metaphors abound as we see the delicate balancing act she undertakes to protect the precious carp on their journey.

This is storybook story telling and you can appreciate it on that level alone. But you can also dig a little deeper beneath the veneer of the text and find some insights and philosophies pertinent to people and the world they inhabit. It’s an unusual and enthralling read.

A further shout out for the translator here. When you have a good translator the reader becomes largely unaware that they are reading a translation. That's how it should be? That's how it is here. Decoin's sumptuous and expansive prose is prominent. This book is a delight to read.

Many thanks to Corinne Zifko and MacLehose Press for a greatly appreciated proof copy.
Posted by Bookphace at 08:12