I have resisted the temptation to binge on the trio of Michael Gilbert books I received from the British Library. I’ve been pacing myself. Inadvertently I seem to have left the best until last! This one is a corker if I may slip into the vernacular of the period. Double delight; a crime/mystery story and a prison camp escape story! Both beautifully interwoven by the skilful pen of Michael Gilbert. 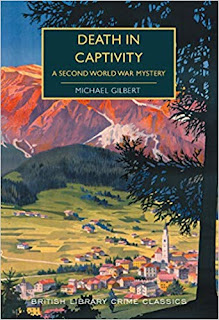 It’s a complex labyrinth of a mystery plot with so many possibilities of what might have happened. as to what actually happened, well, the final denouement is scrumptiously unexpected. All the way through the reader is led down so many different paths that you end up suspecting everyone, even the dead man! It slots neatly in the locked room mystery genre which seems somehow very fitting for the setting is that of a prisoner of war camp. The research is so convincing you never doubt for a moment that you are in an Italian POW camp trying to escape with sand in your nostrils and under your fingernails.

An ‘us’ and ‘them’ dynamic is a given in such a setting but the ‘goodies’ and ‘baddies’ are maybe not quite as clearly defined as would seem obvious. I guess Henry ‘Cuckoo’ Goyle is the stand out good guy, he’s one of the main camp tunnellers and takes up the mantle of amateur sleuth as well. I should point out that I did suspect him too but very, very briefly!

It’s  marvellously sustained piece of writing, evenly and, I would say, perfectly paced with an authentic cast of characters that you can hear as well as see to the extent that you believe you would recognise them if you found yourself in their company. I found myself as interested in whether they escaped or not as to whether the crime was solved! I’m still not sure if that was intentional on the part of the writer!

It’s one of those books that when you’ve finished you feel lost because you’ve been so absorbed in the characters and the story that you want it to go on forever.

My thanks to British Library Publishing not just for this Michael Gilbert book but for all three!! Reader, I loved them!