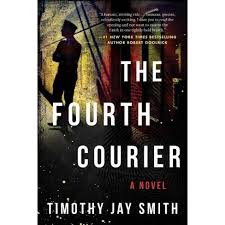 Hold on to your hats for this is a snappy and speedy ride into the murky world of a post cold war Eastern Europe. FBI and CIA join forces to solve a series of related murders that suggest a plot of atomic proportions, quite literally.

Timothy Jay Smith has penned a gripping, intelligent thriller, atmospheric, and effectively creating an uneasy picture of a Poland emerging from the last war. Palpable portraits of ordinary people living in this environment and all dealing with it in their own way whether turning to the wrong side of the law or harbouring dreams of a better life elsewhere provide an energetic background to the main thrust of the tale.

Nothing is quite as it seems and the reader needs to keep abreast of all the characters and their six degrees of separation and happenstance. The reader also needs to fully absorb each event in order to make sense of the unfolding dramas . The characters are boldly imagined, some flawed, victims and aggressors but all have a functional part to play in the narrative. Most of the action take place in Warsaw, so much so that the city becomes an additional character, too, almost. The writer’s affinity with the country is obvious and immediate and infectious.

The book is obliquely informative without that information obscuring the fiction. Said fiction contains several subplots with themes of greed, romance and sex that also do not detract from the main intention of the story, rather they complement it but give the reader an opportunity to think as well. Although blurbed as an espionage thriller any spying aspects were underplayed and it was more about greed, corruption and ambition from the highest to the low that fuelled the thrills.

Brutal in places there is an underlying humour that lightens the mood too and the balance works. It’s a satisfying, no punches pulled read that drags you willingly through to its conclusion.