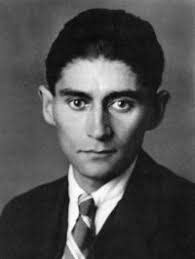 I was late teens when I first read Kafka. It was Metamorphosis. I was so stunned I just sat on my bed unable to do anything but marvel at what I'd just read. I believe it was the first time I felt SO connected to a writer. And I still wonder at that indefinable 'thing' that grabs when you read the words of a writer. What is it?  Is it 'just' the writing? Or is it a right time, right place kind of thing? It's something many decades later that I still ponder!!

For a while I lived and breathed Kafka. Everything he wrote I inhaled it all. Maybe I was obsessed, maybe I was possessed!! For a while I thought I WAS Kafka reincarnate and everything  I wrote was pastiche, parody even. I cringe to read it now, not even thinly disguised!!

Metamorphosis was the first but there has been no end. Even if I don't read him often as I'd like to Kafka's there with me. He has the dubious honour of being the only writer whose picture adorns my study wall! (Kerouac should be there too but I've never got around to it!!) I bought all of his work in hardback. I had to wait until I was earning before I indulged! I even bought a volume of his letters in the original German because there was no English translation. (knew that German 'A' level would come in handy!).

I was lucky too because my English tutor was a Kafka nut as well! I didn't know it to begin with because there was no Kafka on our syllabus. I was reading America, sitting in the lobby waiting for someone or other and he walked by. Acknowledging me he asked, 'Good book?'. Since Kafka often rendered me speechless I just held up the book for him to see. I won't forget the look on his face and it was as if he regarded me in a whole other light. 'Very good book!" We became friends because of Kafka, a friendship that somehow managed to stay within the confines of respectability! Because he was a lecturer and I was an impoverished student he had all the latest lit crit and works on Kafka. I remember him lending me  Gustav Janouch's Conversations With Kafka, only available in hardback and way beyond my budget and I thought I'd died and gone to heaven!!

I used to promise myself that when I retired and supposedly had more time on my hands I would reread everything Kafka had written. I haven't managed that, yet. But time is running out. It's anniversaries like these that make me reflect and think, I'm quite keen to see how I feel rereading Metamorphosis now.

Sometimes I wonder what else Kafka would have produced if he'd lived. He was only a month shy of his 42nd birthday when he died. I also think it likely that had he lived he would have perished in the Holocaust along with his family.

Finally this poem by Edwin Muir sums it up.

If we, the proximate damned, presumptive blest,
Were called one day to some high consultation
With the authentic ones, the worst and best
Picked from all time, how mean would be our station.
Oh we could never bear the standing shame,
Equivocal ignominy of non-election;
We who will hardly answer to our name,
And on the road directed ignore direction.

But you, dear Franz, sad champion of the drab
And half, would watch the tell-tale shames drift in,
(As if they were trove of treasure) not aloof,
But with a famishing passion quick to grab
Meaning, and read on all the leaves of sin
Eternity's secret script, the saving proof.

RIP dear Franz. And thank you.