The Seven or Eight Deaths of Stella Fortuna - Juliet Grames 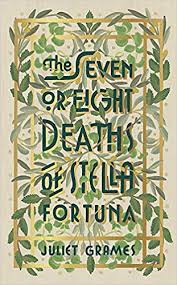 Reminiscent initially of Elise Valmorbida’s The Madonna of the Mountains because of another family growing up in a pre Mussolini Italy, and Angela’s Ashes because of emigration to the United States, this is a family saga of an Italian/American family with considerable depth. Spanning several generations the titular Stella Fortuna is the heroine or maybe anti heroine of this impressive debut novel.

Stella takes being accident prone to a whole other level as we learn the details of her deaths. The reader is lured hypnotically into the novel right from the start because we learn straight away that Stella and her sister are alive and well and elderly and living in Connecticut! So the concept of the seven or eight deaths is tantalising as you really don’t know if this going to be some kind of spiritual, karmic, reincarnation story  - or not! And I’m not saying, you’re going to have to read it!

What I can tell you though is that it is extremely well written. It’s a pithy narrative that doesn’t falter, with some well-defined characters you either love or hate. You get a palpable picture of a poor Calabrian family surviving in a picturesque part of Italy.

To try and escape the worst of the poverty they eventually relocate to America. So geographically the story is in two parts, life in Italy and life in the States. And that would make quite a story just in itself but this is much, much more. This book has a lot to say about the place of women in a society, about those who accept their lot, and those who try to kick against the conventions laid down for them. The attitudes of generations are examined. Considerations of a patriarchal household play a big part. And various types of abuse are detailed which make for uneasy and uncomfortable reading but the incidences are crucial to the plot. I sometimes thought that the deaths referred to a living death for Stella given the situations she found herself in.

There was a sense sometimes of the autobiographical. There is a narrator who synthesises the story and so palpable were the descriptions and the understanding of the various characters that I suspect this author is retelling scenes from memory. Not all, I fervently hope. Something in the narration style reminded me a little of a quirky Marcus Zusak type commentator.It served as a viable contrast to the third person narration of Stella and her life.

It is Stella who is the lynchpin and the driving force throughout the story. For after all, it is her story -  the story of her deaths. There is something very sad about her and not the death aspect at all but the sense that she spends her life being unfulfilled, it’s quite heartbreaking. But I think that is the point of the story.

‘Was she just going to let it happen? Let her whole life be the choices other people made for? But she never made a choice for herself -  that had been her mistake. She never knew what it was she wanted out of life, only what she didn’t want. People can’t understand negative convictions.’

That sums up very concisely Stella’s dilemma. But also sprinkled throughout the book were some though provoking maxims which appealed to the philosopher in me.

‘What if we said the power of human faith in making things real even when they’re not - that by giving imaginary entities our credence we allow them to assume power over us - to step into being? Because what is faith but a willingness to believe?’

‘You step on the boat knowing it is forever, one way or another. But understanding what forever means - that is something your heart tries to protect you from.’

Mention needs to be made too of the arrangement and naming of the parts and chapters. Easy to overlook them in a readers’ zeal to read on but I thought they offered a clever summary of the whole book in a way that headings and chapter namings don’t always.

In some ways it seemed an overlong book but on reflection I found the length another device to suggest that life itself is sometimes overlong?

It’s an impressive debut with an unusual premise and a moving conclusion. My thanks to Louise Swannell at Hodder and Stoughton for an advance proof of the book.