When I failed to receive any kind of advance proof of this third and final book of the Phobos trilogy I did the obvious - I went out and bought a copy.  So I’m a little late to the party! But having journeyed with the gang this far there was no way I was gonna miss the finale!

Collision sees the conclusion of Victor Dixen’s Phobos trilogy, a kind of cosmological 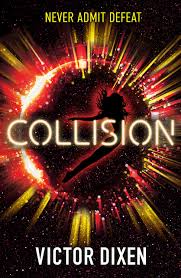 Hunger Games, and it’s explosive with twists and turns you might have anticipated but mostly you didn’t! Well I didn’t. There are some nail biting, jaw dropping moments here as the characters on Mars and on Earth battle the regimes that threaten their freedom and autonomy.

It’s an easy book  to get into as you’re reunited with what feels like old friends now. If you worry that the gap between the last book and this one will cause you to plumb the depths of your memory banks, fear not, it all comes flooding back as you immerse yourself easily back into the rarefied atmosphere of Mars and New Eden.

Serena McBee, arch bitch of the universe, is up to her old tricks, and your hiss/boo meters will be on overdrive as she continues with her heinous plans for herself, for Mars  and - the world.

‘I’m counting on them to ensure a whole culture of self-policing that would make the authoritarian regimes go pale, thanks to poor citizens’ smartphones, their domestic drones, this wonderful image obsessed society in which we live.’

But I don’t want to divulge too much of what happens, I hope you’ll read the book for yourself. Of the three books I feel this has expanded thematically with more political overtones as McBee achieves a position of power. There are obvious parallels to be made with the regimes we are living in now. In fact the whole trilogy is interesting because it could so easily just be a sci fi rom com in outer space where boy meets girls and the goodies fight the baddies but I always get the feeling that Dixen is subtly trying to offer some kind of allegory to the world today without going too far down the preacher route. It’s there if you want it, otherwise just enjoy a damn good sci fi yarn.

The narrative flits from location to location seldom allowing you to relax into one place or another. You’re kept on your toes the whole time whether you’re on Mars or in Scotland. It's fast fuelled and the narrative moves forward at a cracking pace.

There was only one incident that really stretched my belief but I’ll let it go because it was ingenious and everything else is so convincing. I’ll not say what it was but it might give you a buzz when you read it. That’s a clue!

Once again Daniel Hahn’s marvellous translation does Dixen’s prose the justice it deserves. In fact you’d be hard pressed to believe that this the work of a French author. I guess the most obvious clue is the main protagonist and the only character who gets the first person narrative treatment is Leonor, the French representative on Mars.

I experienced that curious paradox that has a reader desperate to read to the end of the book to find out what happens but then that sense of loss when you do because it’s all over. A fan of the books has produced a very convincing and clever Youtube video editing clips from other films suggesting a film of the trilogy. It momentarily had me fooled!! It's really good. Check it out!


I salute Monsieur Dixen. I remember when I received a proof of Ascension my initial thought was, oh no, not another dystopian, futuristic trilogy!! But I love these books. He’s taken a genre and somehow made it his own.