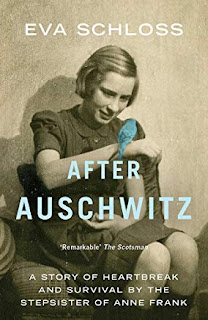 I was privileged to attend a talk given by this remarkable 90 year old Holocaust survivor recently. As time marches inexorably on there are fewer and fewer survivors of this most heinous Nazi atrocity around. I believe it is important to carry these testimonies on if we are to keep awareness of the Holocaust alive and prevent anything like this happening again.

This book, published in 2013, is an account of Eva Schloss’s life, before the Holocaust; her childhood in Vienna and her refugee life in Belgium and Holland, during the Holocaust; her arrest and incarceration in Auschwitz, Birkenau and after the Holocaust; in London and how she came, after forty years of silence, to speak of the ordeal she and her family endured.

It’s an honest, informative account. It seeks not to sensationalise, dramatise or overstate anything that happened. Yet it is full and detailed allowing us to glimpse into the life of a girl of fifteen arrested (on her fifteenth birthday too) by the Nazis for being Jewish. Any survivor story is a harrowing read, how could it be otherwise? Any survivor account is special but what makes Eva Schloss’s story slightly different is the fact that she knew Anne Frank, lived opposite her in Amsterdam. As fate intervened Eva became Anne’s stepsister after her mother, who also survived Auschwitz, married Otto Frank, Anne’s father after the war. They worked tirelessly to tell Anne’s story and  refute the claims that the diary was fake.

Eva’s honesty is direct. When speaking of the atrocities perpetrated by Russian soldiers against German women she struggled to feel sorry for them because of there regime they supported.

‘You will have to understand that I cannot be objective about this subject - my own suffering and loss will always be too deep and raw. Intellectually, however, I do believe that human rights apply to everyone, and that atrocities committed against anyone are wrong.’

The acknoweldgement of her survival is pragmatic,

‘Mutti and I had survived through luck, willpower and the protection of Minni. We had outlasted what I believe was the most evil ideology of ethnic cleansing and killing in history.’

(Minni was a friend in the hospital at Auschwitz).

It’s astonishing to comprehend as you read the book that this lady kept silent about what she endured for forty years! She carried it all inside her. I have read of this before and Im sure that there were survivors who never spoke of it all. I remember my parents had a friend who always presented as little odd, a little off balance. The story was that he had been in a Japanese POW camp but had never spoken of what he had experienced even to his family. In her talk Eva spoke of PTSD and the help available today but there was no such strategies in place at the end of the war.

Fortunately for us in 1986 when Eva was involved in an Anne Frank exhibition she was in the position of having to speak and that seem to open the valve and the silence of the years dropped away and she’s told her story ever since.

‘I wanted to talk to those people about the bitterness and anger that made them blame others. Like them, I knew just how hard and unfair life can sometimes seem. For many years I was full of hate, too.’


For students of the Holocaust it’s a must read. . The voice of Eva shines through and the narrative style and pace is easy to read.

‘This book is dedicated to the memory of the victims of the Holocaust and genocide who could not tell their own stories.’

This blog post is dedicated to all survivors with gratitude for them having the courage to tell their stories.
Posted by Bookphace at 12:40