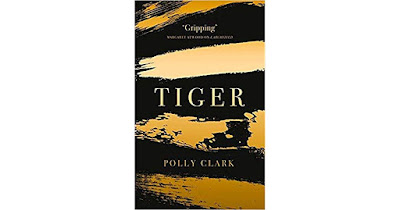 ‘Tyger! Tyger! burning bright
In the forests of the night,
What immortal hand or eye
Could frame thy fearful symmetry?’

Okay, maybe a bit of a cliche, but somehow Blake’s poetic homage to the paradox of creation, with its tiger the symbol of spiritual revolt backed by uninhibited natural energy, seems to encapsulate something of the mood created in this stunning second novel by Polly Clark.

I imagine every novelist strives to create that elusive of things - the perfect novel. What is the perfect novel? I’m not sure. I have no definitive answers but my gut is telling me that this story sure as hell comes close.

It’s beautifully structured for a start. A mood setting prologue. Three seemingly, disparate initially, people stories. Four sections. All beautifully written with an economic yet substantial prose style which effortlessly conveys a depth of emotion allowing the reader to peel back the layers of these people and care about them. Subtly understated and nuanced is the thread that links these three people. It’s never obvious but the astute reader will start to make the connections and will ultimately be rewarded for it as the book heads towards its conclusion.  Underlying it all though, is a deep, profound love and reverence for the natural world and its inhabitants. And the tigers. Always the tigers.

‘Not far, now. Trailing glittering dust from its wing tips, an owl lifted. Two planetary gazes met. Two intelligences: one of air and night; one of snow and dawn.

Of course the stars of the show are the tigers, rightly so. Is this the literary ‘Year of the Tiger’? Yangtze Choo’s The Night Tiger hasn’t left my system yet! Most impressive is not merely the meticulous research but the perceptive understanding of how such a majestic and magnificent animal exists. Somehow this writer has gone beyond simply describing the tigers to the extent you feel she has been able to get inside their heads and share with the reader exactly how these animals live and think. The descriptions are real, they’re palpable. Yet it seems that the tigers are there as symbols for our fragmented lives. The tigers’ ability to kill physically belies their potential to heal emotionally.

It’s a book about survival; extreme conditions, freezing temperatures, scarcity of food. The hunter and the hunted. The raw insignificance of a human compared to the natural world and the tigers.

‘The hunter exists outside nature. He changes nature to suit himself. He burns it, chops it, digs it, destroys it. He disguises his own weakness with things he has made: snares, traps, guns.’

But however much reverence for the tiger is the integral thrust of the book Ms. Clark never loses sight of the human condition and as such you have a fiction that is beautifully balanced.

‘My mistake was not that I didn’t try to give my all, myself… whatever the fuck way you just put it. It’s that …it’s that…’ She put her fists to her temples in frustration. ‘It’s that I did!’

The balance is further struck because the book can be appreciated on a number of levels. ‘Just’ a story if that’s all you want but it also raises issues of conservation and the human responsibility for species in jeopardy. It’s about the natural world, the paradox of an hostile beauty that makes survival perilous. And It’s a story of people, our need and dependence on each other no matter how much we hurt or get hurt in the process, It’s about love.

The closest most of us will get to a tiger are perhaps our domestic tabby cats?!?! Somehow reading a book like this changes the way you think about them!

My thanks to NB Magazine/Nudge Books for a proof of this remarkable story.