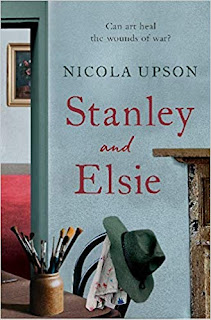 Nicola Upson wasn’t a writer I was familiar with although I was aware she had written some detective stories. This novel caught my eye because of the art theme and because it was historical fiction. I was aware of the work of Sir Stanley Spencer and the love he had for his home village of Cookham. But I was unaware of the details of his life and if this novel has done anything it has me scurrying to further explore the work and life of this great British painter.

The title is bit of a misnomer for whilst the thrust of the book does clearly examine the relationship of Elsie Munday, housemaid to Stanley Spencer that relationship is a catalyst to put Spencer’s other liaisons under the microscope, namely his marriages; first to Hilda Carline and then to Patricia Preece. The ‘secret’ bonding of Patricia Preece and Dorothy Hepworth is sensitively and compassionately portrayed in the book as well. Elsie is the solid, pragmatic and unifying presence in the lives of these people. Her observations lead the reader to learn much of the man who was Sir Stanley Spencer.

But you get the feeling that this fictionalised account is merely touching upon Spencer and his eccentricities. It’s a book that makes you want to find out more. Since finishing it I have subsequently googled the Spencers and their children, googled Patricia and Dorothy, and the Sandham Memorial Chapel at Burghclere which I am now desperate to visit and view the murals Stanley painted! If that’s not the mark of a good book I don’t know what is!

The book is divided into three parts with a prologue. Part 1 which is the longest part is seen primarily from Elsie's perspective. The second part is from Dorothy’s perspective mainly and the final part is a conclusion of sorts. Each part is prefaced with a pertinent quote from Stanley Spencer.

‘We blew about five years like a couple of rooks in that cottage in the field by the railway cutting.’

‘Love is the essential power in the creation of art and love is not a talent.’

‘All things seem to have to be memorials for me to love them.’

There is an underlying poignancy in the book for the portrayal of Spencer sees him as a  paradox, infuriating and egocentric one minute, childlike and loving the next. It is a  fascinating portrayal of the man and there was a point where I wondered if PTSD from WW2 affected both his creativity and his eccentricity, his painting was a way for him to try and understand what war had done, not just to him
but to others as well.  However it would be wrong to view him as ‘just’ a war artist and I think the book does a good job of persuading the reader to consider his entire oeuvre.

The writer’s research of Spencer is thorough and it would be easy to focus just on that aspect of the book but it would be a disservice to overlook the social history that examines the protocols of the age. The research here is also extensive and convincing. The appeal is therefore broadened to art lovers and history lovers.

I always think it is a brave writer who tackles an historical character and subject within the framework of a work of fiction. Get some salient fact wrong and the world can come down upon you! But to enjoy a work of fiction any desire to go fact checking is perverse in my opinion! So convincing was Ms. Upson’s narrative I swallowed it all. The writing has a flowing, easy pace to it. The characters are engaging, you care about them (even thought at times I could have slapped Stanley!).  I conclude as I began; I have a desire to seek out Spencer’s paintings and find out more about him.

Thanks Nudge for a copy of this fascinating fiction.
Posted by Bookphace at 11:26