**Update** I've found  a peace within this situation now. I understand and accept that my social media reach is not sufficient for publishers to feel it that worthwhile to send me any volume books, certainly not the larger publishers. Neither is it broad enough for me to engage with other bloggers and my attempts to do that have met with minimal success. I think I'm a writers' blogger! For it's authors I get the most engagement and positivity from! I'm not good at self promotion or selling myself and I'm a quality not quantity kinda person. The blog views have increased slowly but even that doesn't matter. I love what I do and I'll keep doing it. If folk want to read then that's fantastic, if not then that's okay too. If I'm the world's worst blogger so be it! 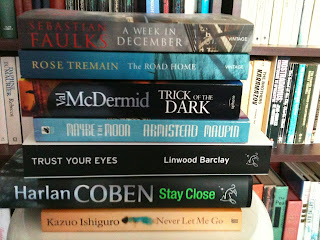 As the viewing figures for my blog have dramatically plummeted in the last few weeks for no apparent reason as far as I can see, I am forced to think about what I’m doing and why. Another worrying fact is that I currently only have two proofs left to review! It’s years since I’ve been in that position. So what has gone so horribly wrong? Or is wrong the wrong word?!

Is it because I’m too old? Is it because my blog isn’t pretty enough? Is it because I don’t make beautiful Instagram photos? Is it because I don’t have hundreds of followers? I suppose I can live with all of those and be quite rational about it because on the one hand it’s consistent with the fickle and self aggrandising veneer of life today especially online and in social media. Quantity not quality, and I kinda get that because on the other hand ultimately it’s all about selling books and making profits isn’t it? Publishers aren't going to dish out proofs unless they're gonna get a return on their investment. So maybe they don't care just as long as the book is getting exposure.Yet, I like to think I’m about quality, with some depth. So I guess I’m no use really in the business of actually selling the books. I don’t have enough reach. And visually I don't cut it.

But what if it’s because I’m actually a crap reviewer? I read other blogs and I can’t see that what I write is that much worse than anyone else’s. In fact one author I admire told me I was good enough to review professionally and a quote from a review I wrote is in a published paperback!! I can't be that bad then? Other people have said I was a perceptive reader, a good interviewer but .......what if it's all bullshit? And I believed it all because I wanted to believe it, because I wanted to be good at something. Right now I’m so disheartened that I’m wondering whether it was worth it?

I’ve no shortage of books that’s for sure! My TBR shelves are groaning under the weight and I’m getting time to read some of them. And that’s great. Maybe everything happens for a reason. Do I review and blog them, though? My confidence is shot to pieces. My finger did hover over the delete button at one point but I won’t delete the blog. I have several reviews ready for some books’ publication dates and I will always honour my commitments even if loyalty counts for nothing. I've been left out of some social media blasts even though I've been sent a proof and I'm getting zero response to my requests and enquiries. But a great deal of work has gone into the blog. So it can stay. Maybe I’ll post something every once in a while. But I think my life as a blogger must be done. It hurts too much to be lousy at something even if you do love it. I’ve had too much failure in life to contend with to contemplate flogging a dead horse.

I could just stick two fingers up and say, okay, I’m a crap writer and reviewer but it’s what I do and it’s what I love. The hell with Twitter and Instagram. I don’t do Facebook, I do Bookphace, so shoot me. Am I doing it just for me? There was a time when I hoped my passion and enthusiasm for books might inspire people to seek out the books I’ve written about, the authors I’ve interviewed but perhaps it was arrogant of me to think that my opinion counts in any way. I suppose it's because I care so deeply that it's hurt so much. Pride comes before a fall.

To anyone who reads this, and frankly I doubt there will be many, and to anyone who has read in the past, thanks. I’m sorry I couldn’t be better. Watch this space though. It's not over yet. It's not over till it's over and ..........I haven't started singing..........yet.