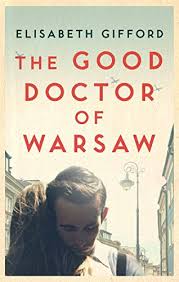 The Good Doctor of Warsaw? Sounds warm and cuddly doesn’t it? And then you begin to read and understand that this is book about the Holocaust. I always have admiration for a writer who tackles this difficult and emotive subject. For some reason it has fascinated me since early teens. Possibly because my younger mind could not comprehend the extent of mans’ inhumanity to man.
So I’m what you might call well read on the subject - fiction and non fiction.

From time to time the unsung heroes of the Holocaust find their stories told. This book celebrates, if that is an acceptable word given the subject matter, the work of Dr. Janusz Korczak. A kind of Polish Dr. Barnardo, Korczak put forward some innovative thoughts with regard to children - the understanding, caring and education thereof. He also happened to be Jewish and Polish, living and working in Warsaw, running an orphanage, at the outbreak of WWII.

This book is a fictional account of Korczak and his orphaned ’children’ from May 1937 until the end of the war and liberation. The construction and the living conditions within the Warsaw ghetto palpably described. Crucial to the plot and narrative is the tale of Misha and Sophia. Misha being one of Korczak’s disciples. This could have been a dry, turgid factual account of the good doctor and all that transpired in Warsaw during the Nazi occupation but this author has very skilfully and accessibly rendered it a fiction drawn very much from the facts of the events. So much so that it becomes almost a shock to read that all these characters were real people. In the afterword Elisabeth Gifford alludes to her friendship with Misha and Sophia’s son, Roman, thought the writing of this book which offers a further stamp of authenticity to the work.

As such she has created a very readable account of some Holocaust humanity, a paradoxical term if ever there was one, but this story needs to be told. Like Schindler’s Ark informed  us there were people who cared enough to try and stand up to the oppressors. It’s not about success or failure but about bravery and humanity. About the endurance of love through the obstacles of time and war.
If you’ve ever stood beside that monstrous single rail track running through the gatehouse at Auschwitz, Birkenau and felt that palpable chill of evil that will never leave you books like these go some way to quell it. And with events taking place in other parts of the world today stories like these need to be read and understood more than ever if we are to learn something from what has gone before.

Enjoyment is something of a nebulous term applied to a book of this nature but for want of a better word I did enjoy this book and I’m humbled to be educated about Dr. Korczak from a book written in such an easy, accessible style.