The Tattooist of Auschwitz - Heather Morris 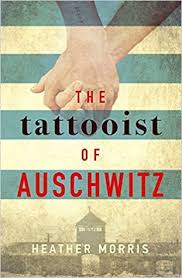 Having recently read both Affinity Konar’s Mischling and Elisabeth Gifford’s The Good Doctor of Warsaw I was prompted to observe the increase in the number of fictional works about the Holocaust and to affirm my admiration for the bravery of writers prepared to tackle such a powerful and emotional subject. And here is another from Heather Morris who has used her friendship with Lale Solokov and his son to create a moving, readable fiction of real life events. It is one thing to create a fiction on factually based research but this novel is elevated by the writer’s personal interest and friendship with the protagonist of this story, Holocaust survivor Lale Solokov. I believe that shines through in the writing.

It’s a wonderful story and the redemption is uplifting. it isn’t often you can come away from a Holocaust work having cried and smiled. And because it’s a true story those emotions burn fiercely. It would be easy to sum this book up as just being another book about Auschwitz and the Holocaust but it is more. It is about Love. optimism, the human spirit, endurance and determination. I get the impression that wherever and whatever befell Lale he would have endured. The book demonstrates the respect and kindness he showed everyone in spite of the appalling circumstances in which he found himself.

But please don’t get me wrong, there are no punches pulled here, no sugar coating. No watering down of the brutality and atrocities perpetrated. The descriptions of Mengele are chilling. But what I found very important  here too was Lale’s relationship with Victor and Yuri which I think helps emphasise the fact that there were German people who were not sympathetic to the Reich and could find ways of metaphorically sticking two fingers up at the Nazis.

The numeric tattoos are almost synonymous with our perception of the inmates of Auschwitz. I have read a great deal of material about the holocaust and visited the camps at Auschwitz. But prior to reading this book it had never struck me so forcibly that someone did that job. Someone tattooed those poor souls and for some reason I had always imagined it to to be an SS officer or Nazi administrator.  Somehow I found that very moving.

At the end of the book are some photos of Lale and Gita, his wife and co protagonist in this amazing tale. There is also an afterword by their son Gary. They round things up beautifully and upraise this tale even more. It’s the first book I finished in 2018 and I can’t think of a better book to start the year with.