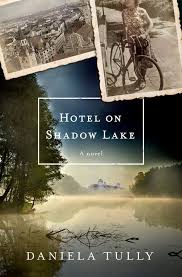 This novel is a debut work from an erstwhile film producer. Not surprisingly there are some visual elements to the story and it has many of the hallmarks of a debut novel encompassing what I always like to call debut novel exuberance syndrome. Starting the book I was both tantalised and confused in equal measure; the blurb references Maya and her grandmother with no mention of lakes, hotels and shadows. The prologue of no more than a paragraph introduces us to Maya. But the main commencement of the book acquaints us with Martha. And this, what I would call ‘patchiness’ for want of a better word, pervades the whole book. There is a dual narrative between Maya and Martha but that was interspersed with other letters, diaries and stories all fundamental to the plot  but their inclusion rendered the narrative overall as a little staccato. Gosh, I sound like I’m being overly critical aren’t I? I would prefer to call it being honest though because I celebrate and appreciate the debut novel.

I enjoyed the story very much and where the book demonstrated the strength and potential of its writer was in the straightforward passages of narration and story telling. Initially there seemed to be a tentative feel to her words almost as if she couldn’t quite believe she was writing a novel. The passages where Ms. Tully really gets into her stride allows the words, the plot and the characters to flow with ease and there were sections of the story that were quite unputdownable and I couldn’t wait to find out what happened. Events did seem a little tangled at times and I did get a bit lost with some of the family members.

One could compartmentalise it as historical fiction and applaud the research but it is also a human tale of standing up for beliefs, overcoming obstacles and persisting in the search for truth. There’s a mystery to be solved with some complexities that aren’t always convincing. And there’s some pleasing word pictures painted that might hint of some celluloid promise for the future.

With this one book under her belt I’m sure Daniela Tully can look forward to developing and progressing as a writer and hopefully offering her readers further entertainment. My thanks to Nudge Books and  Legend Press for an uncorrected proof copy.
Posted by Bookphace at 15:20