The Wages of Sin - Kaite Welsh 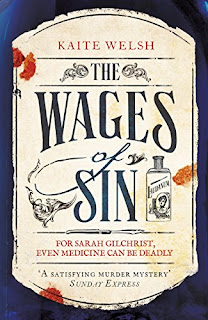 I have a new best friend and her name is Sarah Gilchrist. Originally from London she’s living in Edinburgh studying to be a doctor. She’s feisty, intelligent, caring, a little quick to jump to conclusions sometimes but she possesses a dignity and integrity that many would do well to emulate. But, believe me, living in Edinburgh in 1892 she needs all of those qualities and more besides to deal with the prejudices and hostilities she encounters from those around her. You’re wondering if I’ve lost it aren’t you? I said she was my new best friend? But she’s living in Edinburgh in 1892?! Well, I’m a Reader, sorry, but there it is and if the character in a book leaps off the page at me and into my life there is nothing I can do. It doesn’t always happen but when it does, wow, it really does.

I blame the writer. Why did she have to create such a damn good character? But not only that, she's gone and constructed a really good story too. With a twist I never saw coming. You just cannot expect me not to respond in the way I have to this book. I read it in two days flat resenting all interruptions and previous commitments.

It’s historical fiction primarily I guess but there’s a liberal dose of feminism too. Sometimes when I read historical fiction I question the authenticity of some research and I have been known to nit pick when something isn’t quite accurate but the story and plot were so tight here and I become so involved that I really can’t comment on how credible the research is because I didn’t notice any anomalies ! If I was to nit pick there were a couple of occasions where the vernacular seemed more 21st century than 19th but I’m not going to nit pick.

There’s a palpable atmosphere here so acute you can almost hear the rustle of Sarah’s dresses as she sneaks about Edinburgh’s more dubious environs.  You can commiserate with her on the confines of her contemporary society for as well as a murder story there is a commentary on the role and place of women in the Victorian world. And if I’ve focused solely on Sarah I’m doing the author an injustice for the other characters are well defined and believable.

Sometimes when you have get hold of a book you particularly enjoy there is that curious paradox of wanting to read on to the end and find out what happens but there is also regret that it’s over because you want more. I did a little bit of googling and found that the wonderful Kaite Welsh has another Sarah Gilchrist mystery in the pipeline! The Unquiet Heart. And my heart will be unquiet until I get my hands on a copy!