Crimes of the Father - Thomas Keneally 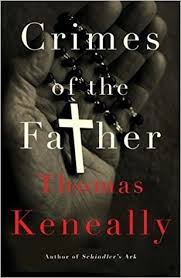 I remember going to see the film Spotlight and wondering how such a subject could make for an entertaining movie. But it does, for it is compelling viewing and allows the factual storyline to evolve without anything gratuitous forcing it along. I had the same feeling when I began Thomas Keneally’s latest work. I ended up feeling that Keneally, too, has produced a compelling book without resorting to shock tactics to get his point across. Not that the story itself is unshocking, it is, it’s theme not unfamiliar it’s sad to say. But you know that in the hands of such a respected story teller as Keneally it will be worth reading no matter how disturbing.

This is a powerful fiction set in Keneally’s home city of Sydney and deals bluntly with the celibacy and child abuse of and by Catholic clergy. The central protagonist Father Frank Docherty is a likeable, though slightly maverick priest who becomes caught up in several cases perpetrated by the same abuser who is the brother of a close friend. He is a flawed character by his own admission but all the more real for it. One of the good guys.

Running through the book is a sense of smouldering anger at the guilty clergy and their spurious attempts to justify their behaviour. Also the Church’s manner of dealing with it. The damage done to victims is heartbreaking and as you might expect from Keneally there is no soft pedalling, he tells it like it is. The book is better for it.  I am not of the Catholic faith but I imagine this will resonate very strongly with those who are.

But this is the tip of the iceberg surely; this story is set in Australia, Spotlight was set on the east coast of the USA. Miles inbetween.  Books like these are very important, especially one as well written as this, for they insist we do not sweep such unpleasantness under the carpet nor forget what has and is going on. And to quote Santayana ‘Those who cannot remember the past are condemned to repeat it.”


If you’re looking for a fluffy, cosy little read steer well clear of this book but if you wish to experience a brave fiction that tackles an uncomfortable subject head on, then read on. People who win Booker prizes deserve to be listened to.