Fire in the Thatch - E.C.R.Lorac 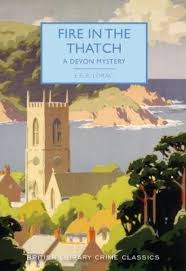 It’s always a treat to read one of the British Library Crime Classics. You know you’re in for a good read. I can’t think of a single volume that hasn’t delighted me and Fire in the Thatch is no exception. A shining example of all that is good about the Golden Age of Detective Fiction and written by a woman. I remember thinking Lorac was an unusual surname and quickly realised it was a palindrome of Carol which gave me my first clue. Google did the rest!!!

Something that stands out for me in these stories is how the meat of the mystery is so much more cerebral than contemporary crime stories. Little in the way of forensics, no digital devices, no criminal psychologists. It’s all bobbies on the beat, observation and deduction. This story features one of Lorac’s main series characters Chief Inspector MacDonald ( wondering if he is a role model for Denzil Meyrick’s  Jim Daley!?) a Scot whose logical and meticulous way of thinking and ordering information allows us to try and solve the crime with him.

A deceptively quaint picture of Devon life on the cusp of WWII ending we get a little flavour of what life was like socially and geographically. With some defined, almost exaggerated, almost stereotypical characters the scene is set and created. You know from reading the blurb that there is a murder but it takes place with no whistles and bells and graphic descriptions. One minute the victim is alive the next the police and a naval official are discussing whether a supposed accident was, in fact, murder. It’s so matter of fact you find yourself flicking back to check you haven’t missed anything.

From then on it’s sheer, pure, unadulterated detection! Bliss. And I have to say that I did figure ‘whodunnit’ and I was pretty pleased with myself. I didn’t figure all the details that led to that conclusion which was well plotted and quite rationally intricate.

There’s a cast of heroes and villains and you can almost hear yourself  hissing and booing when the baddies take the stage. It’s a hugely satisfying read for aficionados of the genre.

Credit too must go to  Martin Edwards for another of his marvellous introductions which I now read before I begin the main fiction instead of after! I’m off to start Bats in the Belfry now and I can’t wait!
Posted by Bookphace at 17:17