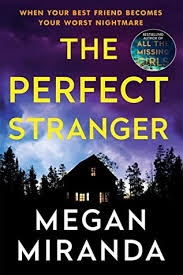 I haven’t read All The Missing Girls which seemed to garner a great deal of praise but that might be to my advantage in this case as I have nothing to compare this story with. I found the book to be a compelling read, I wanted to find out what happened. It was interesting because as I progressed through the narrative I thought I had yet another flawed narrator tale, so in vogue within the thriller genre today.  I smugly thought I’d interpreted all the clues correctly and come to  - the wrong conclusion! And in my perverse way I actually enjoy that!! That a writer can wrong-foot me and wipe the smile off my face is exciting. It messes with your head in an irresistible way. There are a lot of twists and turns in this story making it hard not to give anything away but that does somewhat restrict all that I’d like to say about it. So I’ll begin with a book blurb summary -
‘Having reached a dead end in Boston failed journalist Leah needs a change. She runs into an old friend, Emmy and they move to Pennsylvania. Not long after the move a woman who resembles Leah is assaulted and Emmy disappears. Detective Kyle Donovan and Leah work together to uncover the clues surrounding  the assault and Emmy’s disappearance.’

I didn’t find any of the characters particularly engaging but I never got the feeling that I was supposed to. The strength of the book and the momentum it generates seems to derive from a desperation to know what happens next . This was sustained for a good three quarters of the novel but I felt a subtle shift in the dynamic as we neared the conclusion. It was almost as if for writer and reader alike the reaching of the end was an inevitability that was not particularly desired. And I suppose I found the final denouement a little confusing with the red herring hues ranging from pinks to scarlets.

But it’s a sufficiently complex psychological thriller that will delight fans of Megan Miranda and gain her a few new ones along the way.
Posted by Bookphace at 15:54