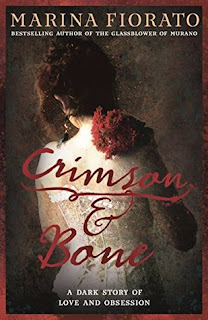 This is the first of Marina Fiorato’s books that I have read and I was suitably entertained by her writing. This was an easy to read book, historical in its basis and veering towards romance and almost thriller. Set initially in Victorian London with a protracted stay in Florence and a couple of eventful visits to Venice there was a flavour of the gothic about this tale of revenge and obsession.

The authenticity of historical fiction depends upon the quality of research  and whilst I noticed a couple of anomalies that didn’t affect my enjoyment of the story overall and I see no reason to detail them here. The story flows pleasingly enough and it was one of those novels where the reader is encouraged almost to predict outcomes and make assumptions that are not necessarily so. We are handed many clues but it is up to the reader to use them wisely!

I’m never a one for spoilers so I hope this isn’t considered one but I did find it almost amusing that the names of several characters  seem to derive from the suspects and victims in the Jack the Ripper case - Annie Stride, Mary Jane, Francis Maybrick Gill - I thought it was my imagination at first but these surely aren’t coincidental names? Annie imposes herself as the character with the most substance. Francis is unnerving but how could you fail not to love a character whose Italian moniker is ‘l’uomo arcobaleno’ ?

I enjoyed the Pre-Raphaelite art theme in this book and the descriptions were vivid enough to imagine how the canvases must have looked upon completion. The discourses on colour and pigments were fascinating. The novel is colourful and the writing style lent itself to these themes. It would seem that the writer is an art lover as well as a history lover. But there are several allusions to the contemporary cultural arts of the age - Dante, Dumas, Verdi almost attempting to present this as an intellectual work which it isn’t.

It’s a very dark tale with an undercurrent of danger and uncertainty, competently written with an economy of language that doesn’t skimp on the necessary but doesn’t overload on the waffle. I won’t say that I’ll immediately rush to read another of Ms. Fiorato’s books but she’s done herself no disservice with this compelling fiction.