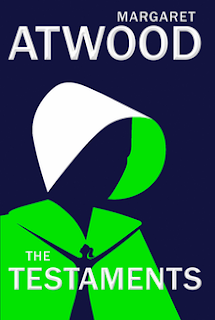 Many have referenced the hype and publicity campaign surrounding the publication of this book. But I hardly think a book like this needs much help! I think it sold itself from the very first announcement of a sequel to The Handmaids Tale. Anyone who has read and revered that would surely have devoured it  regardless of hype. I know I have. I was driven by curiosity in part. The burning question for me surrounded the motivation of the author primarily. What would persuade you to write a sequel  to a novel first published in the eighties and that has a been a catalyst for a three series TV show of the same name? You might be tempted to say money and sales, surely? Exploit the situation to your own advantage? And if the author were anyone other than Margaret Atwood I’d probably cynically be nodding my head in agreement. But for a writer of her integrity, critical success and back catalogue I felt there had to be something else. I definitely wanted there to be!

For me The Handmaids Tale was a landmark in dystopian, no, sorry, speculative fiction and re reading it in a) the wake of series one of the TV show and b) Trump’s America  the prophetic qualities were chilling. Here's what I thought if you're interested - https://bookphace.blogspot.com/2017/08/the-handmaids-tale-margaret-atwood.html

There’s much a TV show cannot represent from a work of fiction especially some of the structure and nuances of narrative and I thought that was apparent when seeking an immediate comparison between book and TV show. However reading The Testaments I feel the book owed much to the TV show! It’s made me wonder how great was Atwood’s contribution to series two and three and it’s made me question, yet again, my memory of the Handmaids Tale! I feel sure there are situations referred to in The Testaments that do not occur in HT but in the TV show. It feels odd to say that. And I will stress that it may be my ageing memory. Atwood has this to say in her acknowledgments - ‘The television series has respected one of the axioms of the novel: no event is allowed into it that does not have a precedent in human history.’ And if that isn’t food for thought for readers and viewers alike I don’t know what is! Talking of food - Blessed be the Fruit.

But I’m also questioning how to approach any kind of relevant review since it is the book not the TV series I need to focus on. But I’m damned if I can rid myself of Ann Dowd’s face when I’m reading. It all seems to fit together so well. I wish I’d read both books without seeing the wretched TV show! I think I could be more objective about the book. Thank goodness, I enjoy a challenge!!

I don’t want to give anything away. Bur the twist as I see it is delicious!! Structurally no surprises here as in HT the testimonies are clear and dominate from the start. And it’s pretty much straightforward story telling of what happens in and out of Gilead several years after the conclusion of HT. That simple, huh? Not really, for at the back of your mind you continue to consider all that’s happening in the world today, politically and within the world of feminism that the book is almost a fabled commentary on our world today. It’s left to the reader to form conclusions and ask questions. One or two maxims that resonate with me -

‘The inventor of the mirror did few of us any favours: we must have been happier before we knew what we looked like.’

‘You don’t believe the sky is falling into the chunk of it falls on you.’

I thoroughly enjoyed The Testaments. As a story, well paced, brisk even, an underlying sense of urgency, anger almost or maybe that is too strong.  It was broader in concept with the voices of more than one character whereas HT offers us Offred’s only. We see it all through her eyes. The Testaments may present as more accessible and appealing to a wider readership in terms of style and the connection with the show. The really strong characterisation was Aunt Lydia which seemed to be the only character where Atwood delves a little deeper. I found myself looking forward to her ‘bits’ more. Was the book what I was expecting? No, I don’t think it was.But then again I don’t know what i was expecting. Maybe that was part of the attraction.  I guess my familiarity with HT and GIlead diluted some of the impact. But I don’t seem to be able to jump off the fence and be critical. I do have to question whether it justifies a Booker nomination though. For I don’t think it achieves the heights that Handmaids Tale did or has. I think it serves to show just how great that book is. I know there are some people questioning whether a sequel was even ’needed’ . That’s up to the writer, no one has to read it do they? As readers we make the choice to do so. Something else that has occurred to me as somehow ironic were the publicity screenings simultaneously in goodness knows how many cinemas of Margaret Atwood talking about the book. It seemed a very Gilead thing to do! One step away from it being beamed to all homes!!??

I think I’ll have to conclude by admitting a large degree of uncertainty. I brought too much to this book before I even started to read it to believe that I can do a half decent job of commenting on it. But it sure as hell has got people talking!