Taylor’s dual persona appeals to the gemini in me but I confess that Sleep is the first of her books I have read either as Cally Taylor or C.L.Taylor. However she has been a writer on my radar for some time. Thus I was delighted to review a copy of Sleep from Readers First. 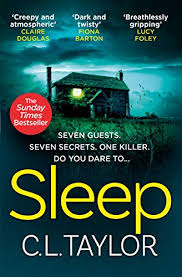 I read it almost in one sitting. Somehow I feel that is a compliment for a writer. It suggests the unputdownable which IS a compliment! Creating an atmosphere redolent of Agatha Christie with And Then There Were None seven guests on a remote island, and, Anna, our protagonist so suffused with guilt she can’t sleep, all combine to create a thriller that has you second and third guessing, suspecting everyone on two legs and rarely reaching the right conclusions.

I love how writers of psychological thrillers have that ability to manipulate their readers. On several occasions here we are ‘persuaded’ of one thing only to find that it is not so and we stagger back in amazement at how we could have made what turns out to be an assumption without any real basis. As the story unfolds and the denouement becomes clear you berate yourself for being so horribly wrong. All the necessary clues are there but you follow the wrong line of thinking willingly! It’s very clever and C.L.Taylor shows herself to be a master of finagling the reader!

But a good thriller needs to be multifaceted and here all of the seven hotel guests have their own stories and secrets for us to unravel and decide what bearing they might have on Anna. And Alex, Anna’s ex boyfriend, what part does he have to play in this? No one escapes our mantle of suspicions which, I suspect, is exactly what Ms. Taylor wants from her readers! The book is peppered with some flawed and blemished people. Their foibles turn out to be quite fascinating and offer some tangential lines of thought and considerations.

But of course we are more than happy to have our thoughts and ideas messed with as long as the conclusions are satisfying and believable. Without that the thriller loses its momentum and the reader feels cheated. So, what happens with Sleep I hear you ask? Read it and see!! I’ve given you all the clues!

Another compliment for a writer is whether the reading of one of their books  sends the reader scuttling off to seek out more. So? Will I be seeking out more of C.L.Taylor’s books? It’s a ‘Yes’ from me!