Something to Live For - Richard Roper

I won this book! In a giveaway! You know the kind of thing on social media, you follow, like, share retweet etc and your name goes into a draw. I don’t know how they do the draws but however they do it my name came up for this book and it made me very happy to win something. 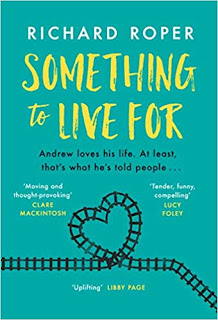 Coincidentally, given the theme of the book, there was a discussion on social media about love stories for men. It wasn’t anything I’d considered but I guess there’s a dearth of them? But if we are getting ‘gendery’ about fiction this might fit the bill as a love story for men. That’s not to say its exclusive, I mean I’ve read it happily. It’s a book for anyone but it’s kind of ‘dudelit’ as opposed to ‘chicklit’.

This is a charming, easy and ultimately uplifting story. Inspired by the author’s awareness of council workers who have cases of people who have died alone often leaving few clues about their next of kin and whilst there is no contractual requirement to do so these workers often attend the funeral of the person so that they have somebody there.

The hero of our tale, Andrew, is one of those council workers and immediately the sense of him as a caring individual is set from the first page of the book. Andrew likes model trains and Ella Fitzgerald. He seems to do his job competently and is assiduous and supportive to a new colleague, Peggy, when his quirky boss Cameron assigns him to be shadowed by her. Andrew appears to be a regular guy, with his wife and couple of kids. However, not all is at it seems but I would be a spoilsport to tell you too much more!

For me it offered a similar vibe to Beth O’Leary’s The Flatshare and could be assigned to the ‘uplit’ genre. But there are some teary moments and I’ll confess my eyes leaked a couple of times. There’s something a tad hapless about Andrew and more than once I wondered if he was somewhere on the spectrum. But as the book progresses so does Andrew in so many ways. There’s a delightful sequence where he enlists the aid of some online friends from a model railway forum.

Andrew and Peggy are almost polar opposites but that dynamic is such that they get on very well and offer some light hearted moments as well as some soul searching ones. The other characters just about avoid being stereotypical or caricatures. But it’s Andrew who gets our focus and our loyalty. He develops as a person and  he comes to a new realisation by the conclusion of the book.

It's a straightforward narrative chronologically with any past reveals offered as dialogue exchanges within the novel. It has a comfortable flow and does not present as an obvious debut novel. There's an element of predictability about it but perversely it actually needs to be! It wouldn't be 'uplit' if it wasn't!

Thanks to @BooksAnd_Tweets (Orion Book) for my prize.
Posted by Bookphace at 09:21