Thus says Ursula Owen speaking of her experiences with therapy. But it’s a maxim that goes deeper and beyond therapy, the spoken word and the written word. I wonder how many bibliophiles among us can run our fingers along our bookshelves and instantly pick out those green spined tomes of Virago books. I also wonder how many of us ever considered the genesis of such a publishing house? I didn’t! I just knew that Virago published some damn fine books that I wanted to read! That omission has now been rectified. In this honest and eloquent memoir Ursula Owen details her life from child refugee to daughter, sibling, feminist, wife, lover, mother, grandmother, publisher at Virago books and more. 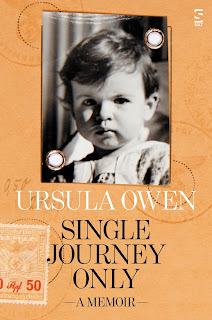 Single Journey Only succinctly details a life lived to the full and offers a frank discourse on those feelings and events that shaped that life. Unafraid of emotion Owen speaks of those confusing days fleeing Germany as the Nazi ‘Final Solution’ gets underway. She bares her soul over the witnessing of her mother's mental deterioration and her father’s ostensibly stiff upper lip attitude to parenting. It’s moving stuff and the reader can only admire Ursula’s resilience.

But more than a personal story this memoir also documents the rise and spread of feminism in the UK. It’s fascinating reading from someone right in the heart of the movement. Absorbing too are the chapters that detail the rise of Virago as a potent force within publishing, the dynamics between its personnel and the anecdotes about some of their authors including Margaret Atwood and an amazing story of Maya Angelou, YES! Maya Angelou, assisting the author in stopping a choking fit when a piece of steak became stuck in Owen’s throat!

Something I found most extraordinary was an affirmed desire to assimilate, conform and belong but in many ways eschewing protocols and presenting as quite non conformist. There is a passage towards the conclusion of the book that strikes to the heart of anyone interested in identity, how we ultimately become who we are,

‘I grew up in a German Jewish family whose history was profoundly altered by anti-Semitism, war and migration. I grew up with a mother who struggled with madness; I was a girl anxious to please, compliant, conformist, passionately wanting to belong, to be part of what I thought was Englishness. I lived through extraordinary times, in England and other countries. I learned something about resilience and  fighting my corner. Becoming a woman in these times, I slowly discovered that I was in some ways inevitably an outsider. And that being an outsider has its advantages.’

Elsewhere in the book Owen opines that she had never thought of herself a writer! I beg to differ! Some memoirs can be such dry ,self aggrandising affairs but nowhere does Own fall into that trap. Her candor is one of the features that makes this such a readable memoir of a most fascinating lady. It makes you want to get out there and live your life whatever your age!

My thanks to Emma Dowson and Salt publishing for a copy of this book.