A debut novel, a ghostly flavour with a ‘Then’ and ‘Now’ structure The Wayward Girls explores the dynamics of a family forced into disarray by some supernatural happenings. It doesn’t have a totally original premise but there is a reasonably unique twist. I found it overlong if I’m honest, so slap on the wrist to the editor! 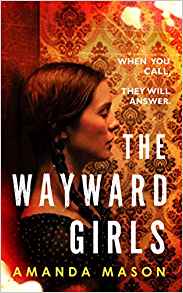 But there is a complex web of relationships drawn that render this more than a mere ghost story. Looking at things from a child’s perspective and then that adult child was intriguing. A now and then maternal relationship too, is explored.  In fact there is a complexity to nearly all the characters which is quite unusual since invariably there are one or two characters in a novel who remain merely functional. I didn’t feel that so here. They were all substantial people with tangled agendas and emotional dilemmas.

I’m not usually a fan of ghost/horror tales so I approached the book with a little trepidation and wondered if it was going to unnerve me but I didn’t find it that scary. I have dabbled a little into the realms of spiritualism and experienced  mediums and chatted with them. Maybe that diluted my potential ‘fear’ . But it does offer some food for thought.

I did experience a modicum of disappointment as the denouement seemed to reveal a straightforward explanation but……… But what? You think I’m going to tell you?! Oh no, you have to read this for yourself.