Whispers Through a Megaphone - Rachel Elliott 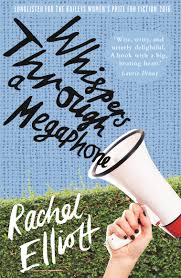 Published in 2015 and long listed for the Bailey’s Womens Prize for fiction in 2016 this is Rachel Elliott’s first novel. I sought it out because Do Not Feed the Bear blew me away. I reviewed it here - https://bookphace.blogspot.com/2019/08/do-not-feed-bear-rachel-elliott.html There is always the risk when you really enjoy a book by an author and eagerly seek out their previous work that the same heights won’t be reached. I suppose if I’m honest I enjoyed ‘…Bear’ more but that’s not to say that I didn’t love this book too. I read it in almost one sitting!! But I guess that stylistically and thematically the parallels with ‘Bear’ are obvious so it was kinda like an extension, if that makes sense.

I love what Elliott does with people, she exposes the paradox of apparent, potential normality with quirky flaws. Somehow in her books flawed and quirky people find each other and forge some meaning into their lives that is positive and uplifting. I wish I could be in one of her books and live happily ever after! But that’s not to say that the fictional journey is all whistles and bells and smiles and laughter, no, there’s some moving and tearful moments. But there’s always an optimism.

‘You treated me like a normal person,’ says Miriam the ‘heroine’ of ‘Megaphone’ at one point which had me tearful.

Miriam hasn’t left her house in three years and speaks in a whisper. The reason aren’t instantly apparent until you read the book and discover her history which breaks your heart. I suppose its possible to summarise the other characters by saying they all have unresolved pasts that, had they acted differently, would have redefined their presents. This book shows what happens when people retrace their steps and try to acknowledge their true natures. It also shows what happens when a concealed past is revealed. Such occurrences could be explosive and damaging but you feel that characters are safe in Rachel Elliott’s hands. I could see similarities between the characters in both of Ms. Elliott’s books. books. Somehow I found this comforting.

One of the features of ‘Bear’ was the extraordinary maxims that peppered the prose with their pertinence and accuracy. I think I ‘overquoted’ in that review so I will try and rein myself in here!
But,

‘A memory is a minefield. The mind is a war zone. So many of us at war with ourselves.’

‘I was thinking about how you don’t always see yourself, “he said. “You don’t see yourself as a real person. So if you put this somewhere in your house, you can’t forget that you exist and we can see you. “ ( Acharacter has given Mriam a carved wooden doll of herself.)

I think what Rachel Elliott does is to show that no matter how different you feel, no matter how much you exist on the periphery of life there is actually a place for you somewhere and people for you somewhere. She also demonstrates the courage it is possible to find when trying to face life’s burdens and confusions. She does it with wit and eloquence.