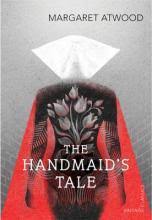 It may seem folly to review a novel that was first published in 1985. However it seems to have been thrust to the forefront of our consciousness again by the US TV series aired by Channel 4 this year. Plus the recent excellent documentary about Margaret Atwood with Alan Yentob on the BBC this weekend.

And it occurred to me to reread it after seeing the effect the show was having on friends and acquaintances. Somewhere in the mix, too, was the fact that the Bailey’s Prize this year was won by Naomi Alderman’s The Power. Girl power all round it seems. So maybe review isn’t the right word here maybe it’s a ’retroview’.

I’ve always felt that Margaret Atwood was ahead of her time in her thinking. And with the diversity of her fiction and her support of all things bookish this places her pretty high on my list of people I’d like to invite to a dinner party! I felt she deserved not just a reread but a retroview as well!

The book has been ‘genrealized’ (is that a word?) into dystopian, feminist literature, even science fiction. Maybe revisiting it thirty years on it’s less science fiction than it was! Atwood, herself, seems to prefer it to be known as ‘speculative’ fiction - a wonderful term.But I wonder if our need to compartmentalise always does a work justice? There is something of the allegory about this story too. The Handmaid’s Tale, I think, looks more at a totalitarian society that is dominated by men at its head but not necessarily at dominant men. Not all the men in the story reach the heights of characters like the Commander. I also think it is an exploration of how people deal with power. The whole Handmaid system seems almost matriarchal with the Aunts offering the training. Within that role they exude much power.

One of the strengths of this book is the fusion between a unique story and the intelligence of the writing. That doesn’t come across in the TV series. You get the story and a visual interpretation of it. I have to say it did mirror my own visualisation of the written word but that is a testament to Atwood’s writing as much as the director’s interpretation of her words. It was fascinating to learnt the provenance of the Handmaids’ appearance from the documentary.

It isn’t a feelgood read. There is something frighteningly prophetic about it. I think that’s intentional. And the story doesn’t unfold as a straightforward piece of story telling. In fact we only know what transpires through Offred’s point of view. We have to trust that she is telling it like it is. And in a sense she has two tales to tell, a before and after. For some the final denouement has been seen as a sort of cop out. I have not found it to be so. I thought it was clever.

Because the story is Offred’s I think we do, as readers, engage with her in a way that we are not encouraged to do with other characters. I think that’s one of the ways in which the story works so well. You’re almost not encouraged to see it from anyone else’s perspective.

So much today is transient. It is unusual for a book written thirty years ago become the subject of new discussion. Obviously the TV show plays a part in that but it serves to illustrate the power of the book.
It is possibly very pertinent right now in contemporary America and maybe the world? So if you just watched the TV show it would be wonderful if you’d give the book a try?