The Lifespan of a Fact - John D’Agata and Jim Fingal 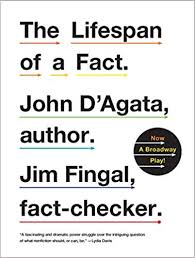 I don't think I've ever read anything quite like this before! And it really can't be easily categorised. Why not? Well, I’ll tell you. John D’Agata, an author, wrote an essay for Harper's magazine concerning elevated suicide rates in Las Vegas after a young boy had thrown himself off the Stratosphere Tower. The article was rejected because of inaccuracies. However it was picked up by another magazine who assigned it to a fact checker. The fact checker, Jim Fingal clearly is a zealous and conscientious fact checker. The result is a quite astounding exchange between the writer and the fact checker which is by turns both hilarious and thought-provoking. Apparently the exchange lasted over seven years! The discussion between the two is just simply so fascinating and brings up all manner of considerations about what constitutes truth, what constitutes accuracy, what constitutes facts,  the difference between the journalist and and essayist, the morality of non fiction and the right of an ‘essayist’ to ‘write something that’s interesting to read.’

The book is arranged with the original text of John’s essay in the centre of each page and Jim’s fact checking arranged around that with black ink for those things he finds that are accurate and red for the ‘inaccuracies’ which includes the dialogue between the two of them. There is more red than black!! Fingal believes that D’Agata has sacrificed the truth and taken liberties in an effort to promote a better flow to his narrative and offer the facts more ‘creatively’ for the reader. D’Agata doesn’t see anything wrong with that. ‘Jim: It’s fake history, and its misleading. John: ….. it’s a cool story.’
‘Jim:…..all you’re really doing is imposing your own subjective feelings on an entire city. That’s not very responsible. John: I am not the first person to suggest Las Vegas is a sad place, Jim.’

The reader finds themselves ping-ponged between disbelief at the sheer pedantry of the fact checker, his insistent, relentless nitpicking and the essayist’s somewhat cavalier attitude at times towards the inaccuracies. You feel the essayist’s frustration at the pointlessness of some of Jim’s over-exacting interventions but you also open your eyes wide in shock at the poetic license the writer has taken with the actual facts.

But it makes for compulsive reading. The sarcasm from both of them is highly entertaining. ‘It’s called art, dickhead.’ But you find yourself chuckling and then you sober up quite quickly as you realise the root and the catalyst for the whole thing was the suicide of a young teen. So the ping-pong game continues with your emotions as well as your thoughts.

There is nothing conclusive which leaves everything open ended for the reader to consider. How much leeway should a writer take when trying to put his point across? My research - (wanna fact check me, Jim?) shows that the book was first published in the US in 2012 but has remerged this year since it has been adapted into a Broadway play staring Daniel Radcliffe. If a production surfaces in the UK put me down for a ticket!

My thanks to Katya Ellis at riverrun for a copy of this zany exchange. I don’t think I’ll ever be the same again!!
Posted by Bookphace at 17:18