I do often wonder whether there will come a time when there are just no more scenarios left to make a gripping psychological thriller. Again and again I’m pleasantly surprised by the expansive and precise imaginations of writers committing to the genre. 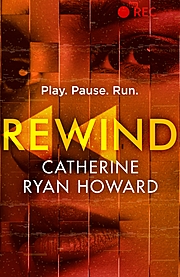 Rewind is intriguingly structured with a new take on multi chronologies. Here the controls of a video recording are used to indicate pasts and presents with Rewind, Fastforward, Pause, Play and Stop, all with the appropriate time counter indicator, as chapter headings. I don’t think it’s been done before and whilst, initially, I did get a little confused between what happened and when, once you adjust it’s an original device that works well .

The basic premise is a murder caught on camera. But it wouldn’t be a psychological  thriller if it were that ‘straightforward’, would it? So throw in some flawed characters, many of whom have things to hide; an Instagram influencer who makes an ill advised journey, a young policeman whose past might influence his policing, a hard up journalist hungry for a story and ………I’d better stop here in case I give too much away.

It’s suitably creepy especially the sequences set in the Shannamore Holiday Cottages and the author steps right in and references Norman Bates before the reader gets a chance to! The atmosphere is sustained and the sense of unease surrounding Shannamore offers the reader an uncomfortable yet compelling desire to read on and on! Like many stories of this genre it’s an onion story. Layer by layer is peeled off to reveal a hard core of truth that does become obvious. although the precise details are withheld until the closing pages of the book. And you realise a whole sequence of events has been set into motion by one small inconvenience. There’s enough for the astute reader to piece together some of the events but enough detail is left and dangled like a carrot to lure us on tot the end of the book.

I can’t see anyone being disappointed if they are are lovers of the genre. Nice one for a summer read!!

Thanks to Readers First for a copy.