‘Regardless of medium, I believe absolutely that any work of art needs to make you feel something…’

If we can expand that to writing then Barbara Bourland’s Fake Like Me does just that. But there’s also something about participating in a buddy read that makes you feel you know the book more thoroughly than if you read it solo with no discussion. I’m sure that’s not really the case, it just feels so. But after having enjoyed a Quercus Books buddy read for Barbara Bourlands’s art themed thriller I feel I know the book inside out! 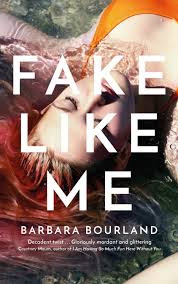 It’s a multi layered book. There is the basic story featuring an unnamed narrator who is an artist, bordering on obsession with another artist, Carey Logan. When Logan commits suicide our protagonist is thrust into a cycle of events that lead to an unnerving and unexpected conclusion. Then there is an erudite and knowledgeable, almost philosophical discourse on the nature of art exploring its fundamental aims and questioning its morality from the creative and economic perspectives. Also the actual processes of creating works of art are described in palpable detail that enable the reader to visualise from a word palette the pieces created by our fictional artists and gasp at the sheer physical effort invested in such works. The referenced real artists had many of us scuttling off to google these hitherto unknown names hungry to delve deeper into abstract expressionism in an effort to greedily try and grasp something more from this magnetic tale of the creative force that drives some people to behave in a less than exemplary manner. The final denouement in this story is unexpected and something of a masterstroke. It all but takes your breath away as you start to comprehend the extent of what has taken place. But I'm in  'strictly no spoilers' mode so, finger on lip. In our buddy read we were all guessing and surmising, nibbling at the truths but not quite seeing the complete picture (no pun intended).

Our anonymous narrator is creating a sequence of paintings named after the virtues - prudence, humility, chastity, modesty, temperance, purity and obedience and the sections are named accordingly. Yet the content of those sections tend to offer the opposite behaviours described! It’s a delicious piece of irony. There’s been something of a journey before our heroine reaches the stage where she can be free to create.

Bourland's style and delivery becomes DuMaurierish at times with echoes of Rebecca, offering an homage to that seminal novel of a main character whose death dominates the story. And there’s a Gatsbyish feel to some of the extravagant party sequences. But to suggest that Bourland possess anything other than a style of her own would be a disservice. The prose is substantial and relevant, economic without losing momentum or essential narrative.

Many of the characters are intentionally ambiguous with that unsettling sense that several of them are not entirely who they purport to be. Max and Charles had our buddy readers divided. It seems that our ‘Everywoman’ narrator is the only character with whom we feel we're getting the real deal. In fact her ‘speech’ at a dinner party regarding the nature of her art and her creative spirit and the total of her being that is required to create is absolutely wonderful, a mission statement that many an artist would be proud to claim as their own. I’m just one step away from quoting it in full!! But I’ll content myself with her concluding sentence, ‘I make things that are emotional. And it’s all I am.’ It's powerful and moving.

She’s more pithy maxims to offer, for example, ’That’s the thing about being cynical. Sometimes you get to be right.’and  'If I took the time to measure the distance of the fall, I'd never jump.'
It’s a fascinating decision to leave a main character nameless. You might think it would prove difficult to engage with her, that we would struggle with her identity but the Bard was on the ball, ‘What’s in a name, a rose by any other name….’ etc etc. and with her trademark pink hair we don’t need a name. We're with her, for her, rooting for her, hurting for her.

There are some arresting distinctions within the book. Several worlds are brought together, the contrast between Pine City and the lofts of New York City, the wider art world and a more homogenous art scene with parties and gallery shows, and trying to synthesis it all is our heroine caught in the maelstrom  of these colliding worlds.

The title of the book is one of those delicious plays on words for the interpretation is diverse and drives us to ask who or what is fake? It’s the pivot upon which the novel balances delicately tantalising its reader with considerations of what really constitutes ‘fake’. And ultimately it's broader than you might think. Am I talking in riddles? You need to read the book to see what I mean!

The last few months has seen a plethora of art themed novels. I am thinking of Tom Rachman’s The Italian Painter, Maria Hummel’s Still Lives, Nicola Upson's ‘Stanley and Elsie, Elizabeth MacNeal’s The Doll Factory with its PRB references, Paul Tudor Owen's The Weighing of the Heart', and Quercus are republishing Elizabeth Lowry’s magnificent The Bellini Madonna later this year. It’s clearly a theme occupying the minds of many novelists. Fake Like Me can proudly take its place up there with the best of them.

My thanks to Quercus Books for a copy of the book and an opportunity to spend a pleasant hour on Monday evenings exchanging views and opinions with fellow readers and bloggers about a book that will continue to occupy our thoughts in the weeks to come.