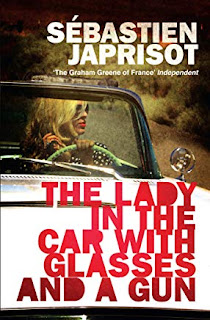 Translated by Helen Weaver
With an introduction by Christian House

Nicknamed the Graham Greene of France this intriguing novel confirmed that accolade for me. I had an overwhelming sense, too, of Japrisot being ahead of his time for this, surely, is a superb example of the psychological thriller, a genre so beloved today. I was amazed to learn that this was originally published in 1966! Despite the shift in society’s dynamic and our dependence on technology this story reads as fresh as if it were written today.

As well as Graham Greene I was forcibly reminded too, of Patricia Highsmith. That powerful sense of the sliding door syndrome where one simple action can change the course of events dramatically and as a reader you will the protagonist to do what would be sensible and avoid all the kerfuffle!! But what kind of a story would you have then!! It’s so clever and that sense runs though this Japrisot gem.

Like the Thunderbird car, which is almost a character in its own right, the story journeys along like a road trip pausing at salient points along the way for a refuel of reader energy and time to consider facts before we go hurtling off again to be assaulted with more actions and diversions confusing and enthusing us to find out what the hell is going on!?

Dany is that epitome of psychological thriller ‘heroines’; a paradox of frail and flawed yet strong and certain and, along with doubt, paradox is at the heart of this genre. You feel that nearly everyone she meets is a potential risk to her equilibrium and the desire to protect her is immense.

But where this book seems to depart slightly from the current trend in psychothrillers of narrative exposition was its penchant for the poetic and ambiguous, especially the conclusion. Printed in italics there is almost a whimsy to it that somehow satisfies the reader that Dany is okay! Skilled is the writer to make us care so much about their characters.

I thoroughly enjoyed reading this book and I am so grateful to Isabelle Flynn at Gallic Books for sending me an advance reading copy.
Posted by Bookphace at 09:56