This review was originally featured in a Nudge Books blog tour slot.

What they are saying about Gone.

‘Some dark, shady characters!’ - Me

’Some nail biting moments.’ - Me

Yep! I said all of that!! Gonna need some shelf shuffling you best selling, psycho thriller tomes ‘cause you need to make room for this little beast! No ‘girl’ this time, just Gone with a capital ‘G”! 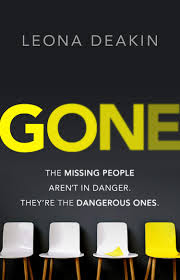 Okay, so this is a debut novel and as such it isn’t perfect by any means but I’m willing to forgive much for a story that had me hooked from the start. I practically read this in one sitting. So what has this got that other psycho thrillers haven’t, I hear you ask? An original premise for a start. Missing persons stories aren’t unusual and there have been some ingenious ‘takes’ but so far in my literary experience this take tops the lot. For whereas the missing persons are usually the victims, those in danger, here, the missing persons are the dangerous ones!

Talking in riddles am i? Maybe. I will struggle to avoid spoilers but I’ll have a go at letting you in on why you do need to read this audacious little number. It opens with a typical enough brief prologue suggesting a nasty little perp (but that is neatly enfolded in some of the ensuing storyline with one of the main characters  Augusta Bloom). From there the action jumps to another character and, because you think  you’ve read many thrillers like this before, you snuggle down believing you’re about to learn of a key player, a main part and you are in a way but not in the way you think you are!! Still talking in riddles am I ? Ha ha!

Then we’re hit with the source of the tag line, ‘Your gift is the game. Dare to play?', as our new, not main, character has received a first birthday card with that rather insidious greeting inside it. Told you it was original!  This person subsequently goes missing. Then we learn that three other people have received the same because they have gone missing too and left the cards at their last known locations. Are you keeping up?

What follows is a tour de force of deductive psychological profiling and unravelling that has your mind contorting with impossible conundrums. I’ll admit I reached a point where I thought this is just going to fizzle out disappointingly because how can this level be sustained ? But it was. Okay. I’m a smart arse and I did figure out an identity and I guess it was obvious? (I’d be interested as to who found it obvious and who didn’t.) However the ingenuity was such that as a reader I still wanted to, firstly, see if I was right and secondly, see how on earth this writer dealt with the final denouement. It’s a complex plot and to a degree some suspension of belief is required but so worth it. The writing is taut and crisp for the most part. There is some evidence of what I’ve always liked to call ‘debut novel exuberance syndrome’ where some areas are too wordy. I just raced through these bits!

There’s an good understanding of social media and the place it holds in so many lives now so the story has a very contemporary feel. There was also an interesting juxtaposition of ‘thrilly’ bits and sciencey, psychology bits which flattened out the pace to a degree but the whole experience was immersive.

The characterisations, I reckon, owe much to the author’s background in psychology. The main character Augusta Bloom was an anomaly. A clever anomaly, for the reader is pulled in more than one direction as to her motivations. The suggestion is that this book is the first in a series and I will be most interested to see where this writer goes next with this character. Marcus was an enigma on some levels but I don’t want to give anything away, let’s just say his background suggested one type of person but the reality didn’t quite match that. So you remain intrigued by him.

Okay, so I’m in danger of giving too much away if I carry on and I think the impact of this book is dependent on reading with few preconceptions. This is a very strong debut and I will look forward to see how this exciting writer develops.
Posted by Bookphace at 10:32