Arguing With the Dead - Alex Nye

As soon as I saw ‘Mary Shelley’ mentioned in the book spec my interest was piqued, together with my customary, default, dubious mode when someone decides to write a fictionalised account of a notable person with whom I have an interest. It can go so wrong. Your own vision of that person can be exploded, the text can be peppered with what you perceive to be inaccuracies. It’s a gamble, I can tell you!! But it can go right. It can portray that person just as you imagine them to be, put the exact words in their mouths that you can hear them say. It can develop and enhance your interest and knowledge of that person and render them realer than they were before. 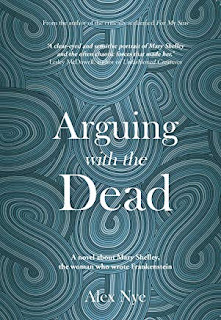 So, I hear you ask, did Alex Nye get it wrong? Or did she get it right? Well, my dear reader, for this reader anyway, she got it damn right!!! I think the real trick was that Ms. Nye seemed to get into the head of Mary Shelley so convincingly. For many people Frankenstein is the sum of Mary Shelley, and a celluloid vision at that. Perhaps they’ll acknowledge that she was married to Shelley the poet, but of course she was so much more and this delightful novel explores and exploits that and paints a full and vivid portrait of this fascinating woman.

The story begins with an older Mary living in Putney and starting to reminisce about her life. It sets the scene and offers us some fundamentals about Mary, not least her love of travel, and the natural world There are hints and suggestions that draw the readers attention back to the title, allusions to phantoms and we are also reminded of Shelley’s place as a gothic novelist by the mood conjured in these opening passages. She is editing and anthologising her late husband's oeuvre too so the reader is swiftly offered the necessary knowledge to support their reading and interpretation of the ensuing narrative.

We return fleetingly to the older Mary in Putney but the bulk of the novel tells us the story of Mary’s life and loves, from young girl to mature woman. It would be a disservice to detail much more because it is an engrossing account of a somewhat unconventional life being lived in conventional times and all the hardships that can entail. The story concludes as it began, in Putney, in a vaguely supernatural, eerie atmosphere.

Nye’s portrayal of Percy Shelley supports our, possibly cliched, view of the romantic poet, idealistic, fey, potentially unreliable. But she goes beyond our cliches to show the depth of Mary’s love for him, oh, how else could she possibly have put up with that optimistic enthusiasm of his?! But the depiction of the dynamic between these characters, and others in the book, serve to offer us an insight into Victorian feminism and what it meant in this times. For Mary Shelley was the daughter of Mary Wollstonecraft, supreme advocate of women rights. And I think what Nye does, too, is to obliquely show the subtle conflict Mary endured between remaining true to feminist principles yet desiring the ‘respectability’ of marriage with the father of her children.

The writing is crisp and smooth and doesn’t falter. It’s as if there's something waiting around every corner for the reader so you read on willing everything to work out okay for Mary. Whether it does or not I refuse to say!! If you enjoy historical fiction, if you enjoy gothic fiction, if you’ve simply an interest in feminism and the part historical forces play in shaping our current world you could do a lot worse than read this book.

One of the marks of good historical fiction for me is that my desire to find out more is fuelled. Arguing With the Dead did that for me and I want to read Frankenstein again feeling that I know a little more of the amazing woman who wrote it. I want to revisit Shelley’s poetry and Byron’s even. Will I find clues and corroborations? Does it matter? Arguing with the Dead is as complete a portrait of Mary Shelley as you’re likely to find within the fiction genre.
Posted by Bookphace at 08:34