This was one of those books that seemed to be popping up everywhere on social media. Not in an overhyped, over publicised way but in a genuinely interested way. What really clinched it for me was when the publishers retweeted a photo of Margaret Atwood with a copy of the book, complete with a bookmark, suggesting it was her current read. I thought to myself, if it’s good enough for Margaret Atwood it’s good enough for me! I bought a copy.

Fiction with a sense of place is one of the first things that popped into my head. The location, ostensibly a Welsh village but a sense of the remote, the homogenous, the secluded, gives the book its faintly uneasy, claustrophobic vibe that pervades the narrative the whole way thorough. The family in the story temporarily relocate to Wales in an attempt to come to terms with an overwhelming loss but it seems the opposite result is achieved. 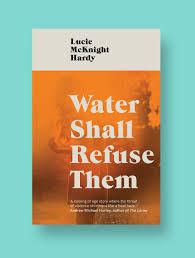 There is an profuse sense of sadness, for the book examines loss and grief and the affect it has on the survivors. The reader is offered the barest of details initially of the tragedy that has befallen Nif and her family. But like an onion the layers are peeled back to reveal the truth which is shocking. You may intuit an inkling of the final denouement but it’s almost too much to contemplate! Set in 1976, the  drought of that year seemed to me to be metaphorical, nomads in a desert searching for an oasis. Each character seemed to be locked into their own depleted world and searching for that elusive relief. But because of this no one seemed really to be able to reach out to each other and offer comfort. Instead they seemed to turn to third parties, to rituals, to find some solace, some meaning, some way to untangle their twisted and troubled thoughts.

It’s book of obsession, of searching for a belief system to get you though your troubled existence. It’s very unsettling to read. I found the instances of animal cruelty unpleasant, malicious, sadistic, I hope that’s not a spoiler, but I can see why they were necessary within the narrative. I had a sense of ‘Lord of the Flies’ with  basic, feral almost, behaviours certainly from the younger characters. and I suppose it is a coming of age story to a degree.

It’s actually hard to categorise which is always a plus for me!! There’s a sense of folklore and mystery,  of subtle horror and the neo gothic, some spiritualism and new age ideologies. It’s well paced and quirky. But it’s not an uplifting book. Sometimes the reader gets a satisfaction from reaching the truth at the conclusion of a novel but here it serves to promote a sense of disquiet and impending doom.

This is apparently the author’s first book. I say apparently because the writing showed a maturity that you don’t always find in a debut novel. In many ways it’s a strange book where the reader can’t really engage with any of the characters yet it's compelling and remains with you for some time after. Not all writers can do that with a first book. That’s enough to firmly keep Lucie McKnight Hardy on my literary radar.