I was fortunate enough to receive an advance proof of Five Rivers Meet on a Wooded Plain several years ago, Mr. Norris’s debut novel. At the conclusion of my review I opined ‘……I will be interested to see how he develops as novelist. If this first book is anything to go by then we are in for a treat.’ Regrettably I have not explored his second book, Turning for Home, …….. yet. But after reading this third most recent work, courtesy of Nudge/NewBooks Magazine, I shall seek it out. It’s a great feeling to be right! For yes, treat is the operative word. I read the first twenty or so pages of The Vanishing Hours openmouthed for it seemed  as if Mr. Norris had secretly observed my innermost thoughts! It isn’t that I have suffered exactly the same traumas as his character but so much of what she feels and thinks could mirror me ‘

‘This is not my real life and I don’t think now that it ever will be. It’s probably time for me to accept that my real life will never happen.’ 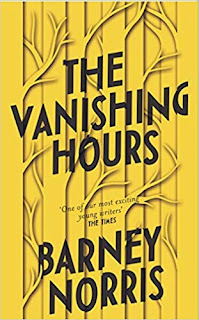 I think I want these two sentences carved on my headstone! And that was just the beginning! But  I shall not allow myself to travel the route of self absorption and subjectivity since that does not constitute an objective consideration of this book. But I would be doing a disservice not to mention how deeply the opening pages resonated with me.

I love debut novels but I also enjoy seeing how a novelist develops in their subsequent works. I remember admiring the poetic prose from ‘Five Rivers….’ and that is another feature of the narrative style in this story. It’s expansive and evocative, allowing the reader to vicariously experience the various accounts and situations described in the book most palpably. There is a dreamlike, Kafkaesque quality to some of the sequences in the story. I’m not wishing to give anything away but the second character finds himself in a sequenced and almost dystopian time warp of diverse proportions. It’s compelling reading and you’re carried along in a crescendo of words and events that almost leave you needing to come up for air.

In contrast the female character has a less voluble, more emotive, tale to tell. In essence these two strangers meet in an hotel bar and begin to exchange their stories. If it sounds like Brief Encounter think again! Some salient details are deliberately enigmatic offering the reader an opportunity for open ended debates as to specific details, hints and suggestions but it’s sub text to a point and it’s only crucial to the plot if you want it to be! For example we know the the lady is having ‘treatment’ but we aren’t told what. I found this an interesting device because the readers’ interpretation will be dependent on their own experience and sensitivity.

I came to a light bulb point where I believed I could see where the tale was headed. And I was correct in the broadest sense but the detail was not predictable. And the conclusion, again, hinted but did not state, of a potential optimism that was uplifting.

I found it to be a highly original story. Much of the narrative was unexpected and had that curious ability to throw the reader just a little off balance. Just two characters with their individual dialogues and I had a sense that Mr. Norris’s career as a playwright had influenced the work. I could even see an idea like this perhaps starting life as a potential two person script. It’s a compelling narrative that takes you into an other consciousness almost. In fact the book is referenced in the novel but it was like The Magic Faraway Tree - but for grown ups.

Although it weighs in at under two hundred pages it’s a perfect example of quality not quantity. For every word counts. And there are some delightful maxims to think about.

‘A little lesson buried in our memories for when we are ready to learn it.’

‘This is what no one understands. You can’t judge someone whose life you haven’t lived. You can’t judge anyone, not in the end, not really. Because you never know where they’re coming from, what standards they’re holding themselves to.’

As such, a book like this is not easy to categorise if you’re wishing for a genre. Its themes are deep, although fundamentally it’s about love and all its complexities. And I suppose it is a love story, with aspects of a modern fairy tale even. But let’s throw away our need to label and define. Just go and read the book!