Fiona Kidman is a much lauded author in her native New Zealand but she isn’t a name to immediately spring off everyone’s lips beyond her antipodean homeland. Maybe this is the book to change that?
I read Songs from the Violet Cafe several years ago and enjoyed her style of balancing the simple with the complex, seamlessly, and encouraging readers to think beyond the immediate. 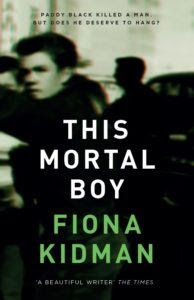 This Mortal Boy is based on a true story and is controversial since it deals with the death penalty ostensibly but further it touches on prejudice and racism and asks us to question the nature of justice and the judicial system.  I don’t think it can be a spoiler since the knowledge is widely available on the Internet but Albert ‘Paddy’ Black was the second to last man to be hanged in New Zealand. He was only 20.

Kidman’s book tells the story of Albert from his beginnings in Belfast and his desire, ironically,  for a better life in New Zealand which results in him being dubbed the Juke Box killer after an unfortunate encounter with a less than exemplary young man who chose to go by the name of a character from a Mickey Spillane novel.  However nothing is simple and what might appear initially to be an uncomplicated murder/punishment scenario is far from it. Firstly the complexities of the case itself, regardless of any additional considerations, pose questions and doubts as to just how straightforward this crime actually is. Secondly these unfortunate circumstances were played out against a backdrop of concern over the morality and behaviours of the young in Auckland and New Zealand at that time in the 1950’s. Thirdly, Black was not a native New Zealander, he was an Irish immigrant, a ‘Paddy’, ‘not one of ours’, and that simple phrase conjures a depth of prejudice and racism that sees the dice loaded before the poor boy ever gets to the courtroom. Finally was the justice system beyond reproach?  Could all the witnesses’ testimonies be accepted as accurate and truthful? A crucial witness, himself in jail for an unrelated crime, is not allowed to testify. His testimony could have changed the course of the eventual outcome for Black.

Powerful stuff, huh? You bet. And Fiona Kidman does an impressive job of weaving these strands all together in a fictionalised account. For all that it’s true, it is readable as a novel, and her portrayal of Black arouses our sympathy and liking for this young man, who seems to have a song for every occasion! But this is a verifiable story, this really happened. The portrayal of his parents, too, adds texture to our emotions as we share a mother’s agony of being able to do so little or go to her son’s side in his hour of need. Of course, with a fictionalised account you can be carried along, especially with such a strongly written narrative as this, believing every word to be the truth, the whole truth and nothing but the truth. So the reader is given the task, a judge and jury task maybe, of deciding what the real facts are and whether the characters depicted in the novel are true to life. But you only have to take a look at the depth of research undertaken by the author at the end of the book to get an glimpse of how thorough she’s been, add to that fact that Albert’s daughter, born after his death, gave assistance. You only have to do a cursory Google and sift through some of the newspaper articles to see the same facts appear again and again.

I very much got the sense from the book that Black was a scapegoat. Wrong place, wrong time, kinda thing. Of course the fact that he did commit a crime and someone died subsequently cannot be ignored but maybe if Albert hadn’t been Irish and the moral climate of the country hadn’t been on high alert he might not have suffered the fate he did. Fiona Kidman is currently campaigning for Black’s sentence to be commuted to manslaughter.

My thanks to Gallic Press for a copy of this powerful story.