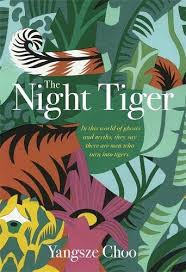 The opening pages of this exquisitely balanced novel demands the reader pose a barrage of questions; my mind was spinning in spirals as I sought to extract the subtle meanings from the first few pages. It’s a book of numbers, two’s and dualities, the forty nine days of the soul and the five Confucian Virtues. It’s a book of Eastern mysticism and superstition which pervade the story like the aroma of sweet incense. A hefty serving of Chinese tradition, social history and the culture of an era serve as an accompaniment to the cast of characters, as this quest, this coming of age, this love tale ensnares you into its web of words and wonder.

‘Chinese people have an aversion to suddenly waking people from sleep, in case the soul separates from the body.’

And sleeping and dreaming are fundamental to the story. It’s beautifully written and at times you have take a step back from the engrossing fiction in order to appreciate the prose style. Metaphors abound; the sustained image of the train and the station and all that it represents is a potent and stirring trope. The use of the dream narrative as leitmotiv too alerting the reader to the spiritual passages in the book. And the tiger! Always the tiger.

It’s a dual narrative, with Ji LIn’s first person hinting at a domination of proceedings from her point of view but that actually never really happens for the rest of the narrative told mainly from the endearing Ren’s perspective is beautifully balanced. The characters that matter are skilfully drawn and we believe in them, we care deeply about them, especially Ren who presents as such a pure being he grabs your heart and won't let it go. The unnamed stepfather is a masterstroke as the unnaming makes it clear he’s a bit player.

We are encouraged, as is Ji Lin, to follow the wrong path in our suspicions and allegiances. The potentially gruesome severed finger is never as gruesome as it should be! Or is that just me?! It morphs into another kind of symbol, a reverse Holy Grail if you will! And shapeshifting is subtly implicit. The cover blurb implies that Ji Lin and Ren’s path will cross and it is pure fictional delight for the reader to experience the progress and how the writer engineers that eventual meeting.

This is high quality story telling, richly structured with sub plots of sibling rivalry and love and a belief in something beyond this earthly plane. And although everything is tied up very neatly and conveniently at the end you find yourself wanting to know what happens next? What happens to Ren and Ji Lin and Shin? There is an understated optimism though.

There’s nothing not to like about this book. It’s a something for everyone book, history, spiritualism, love, mystery and intrigue. And it leaves you feeling somehow satisfied in a way that not all books do.

I was privileged to participate in a month long ‘buddy read’ on social media with the various exceptional personnel from Quercus Books, some fellow bookish folk and the novel’s charming author, Yangtze Choo, herself .  She offered many insights into the writing of this book and some background to some of the themes and images contained within the book which serves only to endear it to me even more. My thanks to Quercus Books for an advance proof of this delightful tale.
Posted by Bookphace at 08:42