An Interview with Linda Green

Today sees the publication of Linda Green's ninth novel, The Last Thing She Told Me, which I reviewed earlier this week. And it's World Book Day too! So I am delighted to present an interview with Linda. Many thanks to Linda for these insights into the book and her writing and thanks also to Milly Reid at Quercus Book for facilitating this interview. 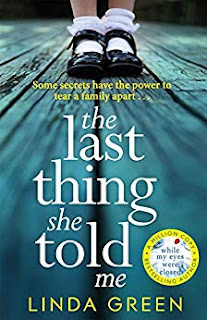 1. To my regret I’ve not read any of your previous work but having read The Last Thing She Told Me I’ve a feeling it won’t be too long before I do! For the benefit of me, mostly, I guess! But also for any other readers who are ‘new’ to you could you tell us little about your journey into novel writing? Your inspirations and your motivations?

My journey into novel writing was a particularly long and tortuous one! I’d wanted to be an author from the age of nine (despite coming from a working class family of non-readers). I loved writing and spent ten years in regional newspaper journalism before giving up the day-job to write my first novel. I had 102 rejections from agents over the next seven years, before I finally got my first book deal!

2. I read that you have a background in journalism and I was wondering how much that enhanced the research you did to fuel the narrative of The Last Thing She Told Me and how you went about it?

My journalistic background is a big help for research. I covered a lot of stories as a journalist and many of them have lived on in my head. I also keep a file (both of physical newspaper cuttings and online articles) of stories which interest me. One of those was a story about an elderly lady who had died, and her children had found the remains of several babies in shoeboxes in her wardrobe. I did a lot of online stories about similar cases of people discovering secrets about their parents following their death.

3. Possibly following on from the previous question the book has a powerful ‘message’, for want of a better word, and to a degree does illustrate the progress, albeit still limited, that our society has made in respect of the issues detailed in the book. For example Nicola is able eventually to discuss what happened to her with her daughter Ruby. I think there is still a long way to go. Did you find it hard to get women to talk about their experiences?

As a journalist, I was privileged to interview many women who had gone through traumatic abusive experiences. I have to say that most young women seemed to find it much easier to talk about what they had gone through than older women. Though often for older women, it was a huge relief when they finally did so. We have made a lot of progress but there are still far too many cases of women being made to feel shame over what has happened to them.

4.You hint in the “About This Book’ section at the end of the story that it was something your grandmother said to you a couple of years before she died that kindled the thoughts that presumably resulted in this gripping book. Without wishing to pry were your grandmother’s experiences related to what happened to Betty and Irene?

Something my grandmother said to another member of my family before she died suggested she had never told us about something which was important to her. Sadly, we’ll never know exactly what that was (although I don’t think it was related to what Betty and Irene went through) , but it made me think about the secrets that generation of women kept for so many years.

5. I found the women in the novel from Betty through to little Maisie very strong, the male characters less so. Was this an intentional device?

I wanted it to be very much a book about these four generations of women from the same family. I also wanted it to highlight the incredible strength women like these have demonstrated in order to deal with things which have happened to them. The male roles in the novel are very much as ‘supporting actors’. It’s the women and their strength which I wanted to be the focus.

6. There are things in the book that are quite upsetting, certainly from a readers’ perspective but from the writer’s perspective was it emotionally demanding to write?

Yes! I cried on numerous occasions while writing it. The characters are very real to me and I felt their pain. I wouldn’t want it to be any other way though, as if they don’t move me, how can I expect them to move readers?

7. I loved the structure of the book! The journal entries and letters were, mischievous almost, subtly deceiving and really made the reader think. Was it always your intention to construct the book in this way?

It was. Again, it made it quite difficult to write but I wanted to weave the the different narratives together and give readers plenty to think about!

8. How do you approach your writing? By that I am wondering if you have a special place, special time, any special routines and rituals?

My writing room is a back bedroom of my house in West Yorkshire. There is a big window looking out onto the garden and I am particularly skilled at gazing out of it! But I can also write pretty much anywhere – trains are a particular favourite. Certainly when my son was younger it was very much the case of grabbing any odd bit of time I could. It’s amazing what you can get done in an hour when you set your mind to it.

9. I know that being an avid reader is almost compulsory for a writer so a question I always ask is if you can remember the first book you read that moved you to tears, if any?

I think it was probably Black Beauty by Anna Sewell. Years later I cried while reading War Horse by Michael Morpurgo to my son. I think Before I Die by Jenny Downham must be the book I have cried most while reading, though. Beautifully written but heartbreaking.

10. And finally having enjoyed this novel so much I am bound to ask when we can expect another new one! And is there anything you can tell us about it?

My next novel should be out in ebook this autumn and in paperback early next summer. It’s called The Second Time We Met and tells the story of a quirky ten-year-old boy and his unlikely friendship with a woman in her late fifties who works in a café. I’d advise readers to keep the tissues handy!

The Last Thing She Told Me by Linda Green is published by Quercus in paperback on 7th March.
Posted by Bookphace at 08:25