A Letter from Sarah - Dan Proops 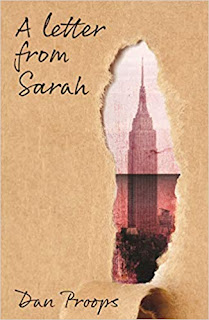 I struggled with what to make of this book, initially, to be honest. It was clearly a debut novel, a narrative that spoke of an author trying to find a voice. But I did wonder whether the work had been a victim of stringent editing as there was a lack of flow to the structure of the narrative in some parts. Short, simple sentences that often contained prosaic detail but didn’t further the story overall. As I progressed though I began to wonder whether it was actually a very clever piece of work constructed very deliberately to highlight the protagonist’s fragmented state of mind, a consummate study in loss and despair. Clever too is the writer’s ability to manipulate his readers emotions towards the various characters in the book. I’m thinking particularly of Nigel and to an extent Darius.

Adam’s sister has been missing for seven years. Both he and his overbearing father, Darius, are distraught at her loss. Unexpectedly on the seventh anniversary of her disappearance Adam receives a letter purporting to be from her. She is apparently alive and well and living in Brooklyn and demands his secrecy as to her existence. I don’t want to divulge anything else except to say Adam’s search takes him across the Pond a couple of times and back again.

The story deals with themes that include grief, loss, faith, belief and the extreme anxiety that these states can provoke. It’s an interesting story because it goes beyond the mere missing person scenario and hints of something more which certainly made me keen to read on to see if what I suspected was accurate. It also highlights the strain that relationships on all levels can suffer and how an individual’s ability to function on a day to day basis can be compromised.

It’s not a feel good book, there’s a lot of sadness in it although there are sporadic attempts at positivity.  I found the ending inevitable, predictable to a degree although you’re never quite sure. There’s something compelling in the story but I struggle to agree with the inside blurb critic who claims it is ‘a literary masterpiece’. If you buy the book on that basis I think you would be disappointed but if you want a compelling, contemporary and compassionate story you’ll be satisfied.  Another part of me feels there may be a hint of catharsis in this story? It clearly means a lot to the writer and for that reason alone it is a worthwhile piece of work. And I thank Urbane Publications for the opportunity to read this story.
Posted by Bookphace at 08:51