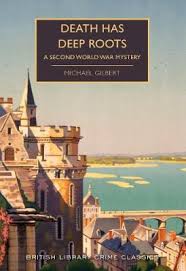 A multi layered crime tale, Death Has Deep Roots fuses WW2 and the Resistance with a compelling court room drama that keeps the reader guessing until nearly the end. Plenty of action and plenty of thinking in this competently written offering from the British Library Crime Classics series.

Michael Gilbert was a founding member of the Crime Writers Association, now chaired by Martin Edwards (who writes the most informative forewords to all these Crime Classics. They wouldn’t be the same without his input)and displays considerable expertise in this story. A thorough knowledge of police procedure and court room protocols guide the reader through a convincing labyrinth of leads and clues and ultimate conclusions.

The story dips between the trial of Victoria Lamartine and the investigation of the murder she is accused of, creating a pleasing balance between the measured and even pace of the Central Criminal Court and the less even and much more tense events unfolding in France with Nap the solicitor’s son who is responsible for the Gallic enquiries. The legal sequences aren’t nail biting but they have a satisfying solidity about both the prosecution and defence arguments.

I found this to be very much an events driven story rather than a character dominated novel. In this respect I found it quite unusual since it is usually the other way round!! There’s plenty to absorb the keen reader and those with an interest in WW2 will not be disappointed with those well researched sections of the book. And for those who enjoy the tempered wrangle and civil thrust of the judiciary there’s plenty here to encourage your thinking.

This is the first Michael Gilbert book I have read but I have two more courtesy of the British Library and I’m curious because apparently a feature of Gilbert’s writing is his propensity to use the same characters over again in varying degrees of importance within each book. Watch this space!!

As ever my thanks go to the British Library for continuing to satiate my unceasing appetite for this series of books.