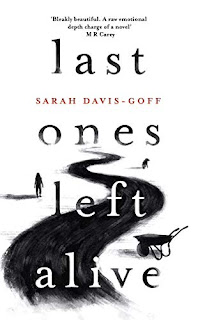 I never did like the word ‘zombie’. It’s too Marvel/DC comics and Lichtenstein for me to the extent that it’s hard to take seriously. So I applaud the invention of a different word to describe the ‘z’ creatures in this debut novel from Sarah Davis-Goff. What’s the word? Oh, no!! You read the book and find out. I’m not telling you.

But zombies by any other name will smell as rank and pose the same threats with a biff, a pow and a bang. So how do you make a zombie novel retain some credibility and not let it deteriorate into Zombie Apocalypse the Musical on Ice? Well, you let Ms. Davis-Goff write it for starters.

In a dystopian landscape where Cormac McCarthy meets James Dashner, Goff seeks not to explain the hows and whys but to describe the nows and thens. Orpen is our girl, part Katniss Everdene, the rest completely  herself and synthesises the contrasting narratives between the tranquil but unexciting life on Slanberg, an Irish island, to the epic survival strategies on the Irish mainland. Part of you wills her never to leave Slanberg but the other part of you urges her to find out what else is out there. Ostensibly she travels to the mainland to find help for Maeve. Who is Maeve? Read the book!!

If you think you’ve read it all before, then be patient. Yes, there are hallmark elements of any number of post apocalyptic and dystopian fictions. But this one’s different.

Firstly, I may be wrong, but much of the dystopian fiction written, certainly, in the last twenty years has been predominantly set in the US. I think. If that’s unfair I apologise. These stories are set in the UK.

Last Ones Left Alive is set in Ireland. So right away it implies a specific dynamic from an historical and political perspective that eliminates the need for the author to waste time with the hows and whys. Toss the Brexit conundrum into the mix, which is surely incidental as I doubt it was in the writer’s mind when she began writing this, and it’s perfect!!

Secondly there’s a strong feminist bias in the book that’s more The Power than The Handmaid’s Tale. Orpen is raised by her mother and Maeve. Their relationship is tacit. In the rest of the book there’s is only one male character. Orpen seems to be running the gauntlet in one form or another her whole life. And there’s a curious sense of her journey running full circle in a way but it’s the last thing you expect. I’m loathe to develop that any further for I would have to offer spoilers. It’s clever though! By jove, it's clever.

The sense of isolation is strong and developed well in terms of a physical isolation and isolation within groups. It is only towards the conclusion that the you get a sense of the inclusive for Orpen.

This is a very laudable debut novel. It’s a confident piece of writing. A strong narrative that flows evenly building up to some nail biting sequences. The characters are few so it was crucial to render them believable. The reader isn’t spoon fed, there’s much to conjecture but not so much that you feel you’ve been short changed.  And there’s a vague optimism at the end. It’s exciting.

My thanks to Georgina Moore and Tinder Press for a proof of this book.