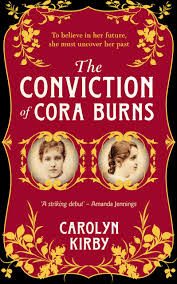 As I began to read this I thought it would be another variation on so much I’ve read before. A debut novelist paying homage to Sarah Waters and other histfic luminaries? In so doing I have really justified my subscription to Arrogant Bloggers and Know-it-all Reviewers.com. This intricate tale is up there with the best of them and oh, how it grips you.

Firstly the title. Clever. Camouflage. Coaxes the reader to follow willingly a certain train of thought and then by the end of the book you realise it is potentially something else. Maria Hummel did that with Still Lives and it is a delight to those of us who revel in the art of the wordsmith.

There’s some common enough events depicted here, poverty, prisons, asylums and workhouses in Victorian England and a ‘big house’ with the ubiquitous fusion of colourful and drab staff but Kirby weaves an authentic tale of a Birmingham bairn damaged yet feisty with enough of a finger on the human condition to survive it all. Unscathed? You read it.

The research is impeccable. Every last detail reads as authentic and believable. So the reader is able to carry a vivid picture of the various locations very clearly in their heads. This is invaluable due to the complexities of the plot. But it’s not merely sociological research that impresses here it is a researched knowledge of scientific and medical ideas of the time concerning insanity, trauma and, a subject that fascinates me and is so fundamental to the dynamic of this novel,  the ideas of nature and nurture. Issues regarding poverty and the place of women are interwoven too within the luxuriant brocade of the prose. I quote below from one of the characters, Dr. Farley, looking to innovate with his treatments.

‘insanity, I explained, may express itself in many bizarre modes of behaviour -  peculiar delusions, religious mania, an obsession with cleanliness, self starvation -  but at the root of all symptoms lies the despair of inequality.’

Characters are believable and strongly drawn. Cora carries us along with her confiding in the reader her confusions and her doubts but assuring us of her tenacity. Gothic characters, men mostly, pace the corridors and laboratories of asylums and prisons offering insights as to how mental health was perceived and treated and the sense that the cusp of a breakthrough might be imminent. Much as Elizabeth Lowry did in Dark Water where treatments of conditions readily treatable today were not identified and recognised yet there were practitioners with compassion and a desire to innovate.

The plot is complex yet accessible. The reader along with Cora experiences the dawning of the truth. slowly yet surely throughout the duration of the novel and you are almost left gasping. Some aspects are chilling to read and the implications unleash a barrage of related connotations. (Josef Mengele was conjured briefly even for me.And, no, I don’t do spoilers).

The narrative has variety, there’s the dual narrative technique with the then and now format. There are research journal entries and scientific publication entries strategically placed which are all deliciously authentic.

The reader is subject to a plethora of emotion but maybe it can be summed up by the gingerbread seller at the end of Chapter 25 - ‘That’s it lass. Weep. Weep yourself dry…… But you’ll get by lass. You’ll get by.’

My thanks to New/Nudge Books for a copy of this book. Reader, I enjoyed it. A lot.
Posted by Bookphace at 16:19