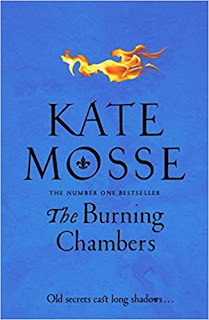 One of the first things that always strikes me when I read Kate Mosse’s historical fiction books is what a deep love she has of the Languedoc area of France. The passion shines through both the fiction and the fact. As always the historical research is thorough and plausible.

The Burning Chambers details the riots of Toulouse in 1562 between the Huguenots and the Catholics. Mosse creates a palpable picture of the carnage that occurred during those riots and the atmosphere of mistrust that ensued throughout the region.

But this is a book that’s more than ‘just’ the history and we would expect no less from Mosse, a master story teller and weaver of fictions. The story of Minou Joubert is the backbone of this tale and the unfolding of the secrets of her past. It’s cleverly done with little clues scattered throughout that interweave with the unfolding tale of the escalating conflict.

Minou is a strong female lead character who primarily dominates the narrative for much of the book and when she doesn’t it is the male lead Piet Reydon who keeps it all going. I am loathe to detail too much of the plot. The book cover blurb contains all you need to know before reading. And once you start reading I’m pretty sure you won’t want to stop!

The story is beautifully constructed, setting a scene, allowing the reader to engage with the characters and throwing into the mix all manner of doubts as to the ultimate integrity of some of the players. There’s plenty of excitement and a tense conclusion as the survival of some of the key characters hangs in the balance. Finally the ends are tied together if the astute reader hadn’t already figured for themselves the secrets of the past. The narrative flows easily and although it is a 500+ page book you can read it as effortlessly as you might a more slender volume. Nothing is superfluous, the pace is maintained and engages the readers’ attention right through.

Scattered throughout the book are some well observed truths that endure in out 21st century world,

‘You will know that if the lie is repeated often enough, in the face of the clearest evidence to the contrary, even the most level-headed of men start to believe it.. Falsehood easily becomes accepted truth.’

‘…. human beings have learnt rather to repeat the mistakes of the past, and more vilely.’

Of the arms dealer Pierre Delpech, ‘Which ever side won, he was in profit. His weapons killed without discrimination.’

An possibly most pertinent of all, ‘How was it that, in more than three hundred and fifty years, so little had changed? So much suffering, such waste and cruelty. And for what?’

I personally enjoy historical fiction very much   I believe it fulfils an important role because it can present history in a palatable way to those disinclined to pick up a factual history book initially. But I  think there is a fine line between a believable fiction running alongside the history because the potential for contrivance is ever present. So a balance needs to be struck which I think Kate Mosse does. There are one or two instances here which strike as purely fictional devices but then it IS a work of fiction. But I think the real icing on the cake is when an historical novel sends you googling the actual event(s) in history. Did I do that, reader? Yes, I damn well did!!

I also enjoyed my own personal serendipity; for having little or no knowledge of the Huguenots I’ve read two books already this year where the Huguenots feature. This one, obviously and Sonia Velton's Blackberry and Wild Rose.

It seems that this is the first in a series of books and I will look forward to furthering my acquaintance with these characters. It’s a thoroughly enjoyable, informative and entertaining read. My thanks to Nudge/New Books for a copy.