Good day! And welcome aboard the blog tour for Felicia Yap's absorbing debut novel, Yesterday. My slot is the last on this tour so I hope I can add something to all that the other wonderful bloggers have said. 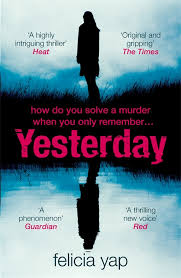 
A brilliant high-concept debut thriller - just how do you solve a murder when you only remember yesterday?
There are two types of people in the world: those who can only remember yesterday, and those who can also recall the day before.
You have just one lifeline to the past: your diary. Each night, you write down the things that matter. Each morning, your diary tells you where you were, who you loved and what you did.
Today, the police are at your door. They say that the body of your husband's mistress has been found in the River Cam. They think your husband killed her two days ago.
Can you trust the police?
Can you trust your husband?
Can you trust yourself?

Plenty of praise for this novel already -


'The thriller of the summer' - Observer
'A 2017 literary event' - Newsweek
'The intrigue of Gone Girl and the drama of Before I Go to Sleep' - iNews
'So hotly tipped it should come with scorch marks... Quite literally mind-bending' - Red
But here's what Felicia, herself, has to say about the book.

And here is what I have to say about the book!

I know that when the hardback edition of this book was published my ‘good book' radar’ activated almost immediately and since then this debut novel from Felicia Yap has been on my periphery. Therefore I was delighted when via Bookbridgr Jenni Leech of Headline Books set me a copy of the paperback to read and review and I’m equally delighted to be part of the Blog Tour for this auspicious debut.

The initial publication seemed to elicit mixed feelings which covered the whole spectrum. I try not to read too much about a book that I’m going to read and review but since this one had already piqued my curiosity it was too late! I had already considered comparisons with S.J.Watson's Before I Sleep and even the film Memento which both deal with deviant memory and recall. But this story explores a more dystopian view of memory with its society structured by the quality of its inhabitant's genetically influenced memories. I am loathe to give anything away even though I’m dying to!! But I’m afraid you’re just going to have to read it for yourselves!

It’s a substantial read with a plot of depth, many twists and turns, some you’ll figure out for yourselves others will have you open mouthed. There are one or two plot holes. So what? It’s a debut novel. Why do some readers expect perfection from the word go? Writers learn and grow. So should Readers!

As with many dystopian works it is sometimes hard to like or even engage with the characters. There’s a kind of detachment almost but I guess it allows the reader to try and be objective when sifting through the plethora of clues and evidence. There is no one here who is an especially nice person. Some of them are downright devious and violent . I quite liked Hans the detective who had his own demons to grapple with.

It’s an intriguing premise that embraces our digital world, and is it too far fetched to ponder whether the society described in this book has evolved from our dependence on digital communication? As well as spinning a darn good thriller this book has much to say about memory. If dementia is on the rise are the causes to be found within our current over dependence on our digital lives? Or, more thought provokingly, as Felicia suggests in the YouTube clip are we selective about what we choose to remember?

Whilst there are many arguments for a fiction that seeks to entertain and demand little of its reader there is also an argument for those works that tickle your grey matter and start you thinking. And which of these camps does this book fall into? Oh, no! You’re not going to catch me on that one! Sorry, but you have to find that out for yourself! 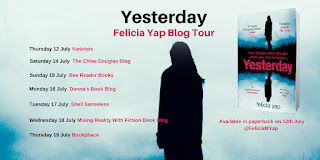 Although this is the end of the tour do check out the other blogs if you haven't already done so. If you have no doubt you're already reading the book! But if not I expect you will want to seek out a copy of this absorbing book.