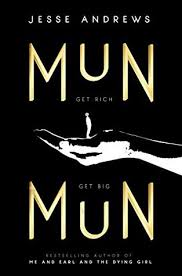 Think Borrowers for the 21st century, think Honey I Shrunk the Kids, think Downsizing, think Gulliver's Travels and you might get a vague flavour of this highly original novel from Jesse Andrews. You can enjoy it on a simple level as a tale of trying to succeed when the odds are stacked against you or you can delve a little deeper and see the work as a satirical and quite savage indictment of the age we live in.

Andrews has created a whole dystopian landscape with the city of Lossy Indica in the Yewess where size is proportionate to wealth, i.e. the smaller you are the poorer you are. However it is possible to scale up with the acquisition of more wealth - munmun. Warner and his sister Prayer are Littlepoors who feel their only hope of a safer, securer future is to scale up. But they need……munmun.

Warner is the main protagonist, a complex character and it is through him that our knowledge and understanding of the fantasy landscape is furthered. There is Dreamworld and Lifeanddeathworld. And what goes on in both is pretty mind boggling!! There are parallels with our own contemporary world though which makes the story pretty chilling at times.

Whilst the author and the setting are American and many of the references are culturally and socially applicable to that nation there are many universal observances here that can resonate with an international audience. It is an inventive and witty book. Andrews has created a unique vernacular by spelling out acronyms and fusing words together, creating verbs from nouns - US becomes Yewess, byanychance, backyarding! Genius! and I haven’t used the best ones as examples for I would consider that to be a spoiler! And then there’s the title itself! But if you love words and word play this aspect of the book will appeal.

I suspect this may be a Marmite book. I can kind of get that it will too much for some people and I’ve already seen some reviews that are calling it ‘weird’.  But those who stick with it and allow themselves and their imaginations to become enveloped by this world will delight in the unusual story and the perceptive observations of  our current society that are given an almost cartoon like or caricatured visual word treatment. I loved it! But then I’m weird!!