Welcome to my slot on the Blog Tour for Domenic Stansberry's The White Devil. My thanks to Alex at Orion Books for the opportunity to read this compelling crime story and for inviting me aboard the tour.

A psychological noir set in the shadowy streets of Rome. With echoes of The Talented Mr Ripley and The Flamethrowers - and just a touch of Hitchcock.
TIN THE STREETS OF ROME, VICKI WILSON'S LOVERS KEEP TURNING UP DEAD.

Vittoria, as she's known in Italy, is a small-time actress who left behind a dark past in her native Texas and followed her fading writer husband to the Eternal City.
Guided by her controlling brother Johnny, Vittoria soon enters the upper circles of Roman society, mingling with shady cardinals and corrupt senators. Among them is Paolo Orsini, who quickly falls prey to Vittoria's charms. Too bad he's married; too bad his wife, an aging film icon, is murdered.
From the ravishing beauty of Rome to the pristine beaches of Malibu, Vittoria finds herself at the heart of a lethal chase, spiralling dangerously out of control... 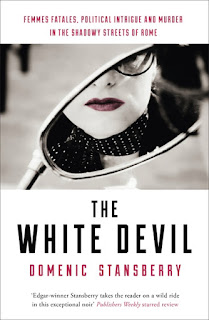 Voluptuous and sharply delineated... the backdrop of sultry and crumbling Rome lends the whole story a hot and crackling ambience — TripFiction.com

A delicious opening which you can imagine as one of those 40's and 50's film noir narrations and draws the reader right in to this contemporary homage to John Webster's play of the same name.
A large portion of the novel is set in Rome and completely enhances the atmosphere and envelops us in the mystery and intrigue which I doubt would be achieved if the story was set in, say, Lincoln, Nebraska or Bristol, Avon. No offence to the good folk of both those locations but set your story In Rome and it's almost like you have an additional,character. Call your main character Vittoria instead of Vicki and you further the suggestion of something beyond the mere criminal.

You could argue that the similarity between Stansberry's characters and Webster's render the former's into caricatures but that simply doesnt happen in the hands of this competent crime writer. Let's face it you don't win the Hammett Prize for Crime Fiction if you create no more than a pastiche. This story smoulders along with subtle tension that has you turning the pages with eager trepidation. The narrative abounds with implications and insinuations that demand the reader speculate. Nothing is at it seems.

The plot is not necessarily an original one and the author alludes to his inspiration. But it's a plot that involves the reader and allows them to harbour their suspicions. Several murders take place and we think we know 'whodunnit' but it's neither wholly confirmed nor denied. As a crime tale it is tight with some tense, unexpected moments especially towards the end and a conclusion that it is inevitable and you kinda realise that's where it's all been heading anyway.

The characterisations are well observed and the Italian society in which they are mingling is well researched and the authenticity complements the quality of the writing. The relationship between brother and sister is suitably ambiguous and you actually abhor Johnny's controlling nature yet understand Vittoria's love for him.
It's a well paced crime story. And you're wasting time reading this when you could be reading The White Devil! !

However I am not the only port of call on this tour. Check out these other bloggers and what they have to say. 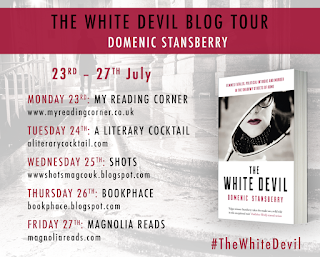