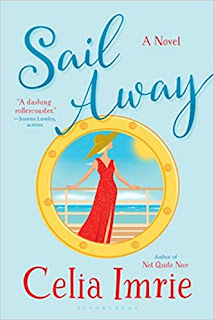 I suppose the leap from successful actress to novelist is not such a big one after all as it’s all about words, isn’t it, and making people believe in them? I’ve loosely watched Celia Imrie’s career evolve over the last few decades and admired her work on stage and on screen, particularly with Victoria Wood. So I jumped at the chance to sample her writing. My thanks to Nudge Books for the opportunity.

It is exactly the kind of book I would have expected her to write! The characterisations, particularly the female ones are roles I could imagine her in! She has also followed the golden rule of writing about what you know so there is much about the acting profession especially the dilemmas faced as actors start to age. And evident from the concluding acknowledgment is Ms. Imrie’s experience of cruising and sea travel so the depictions are authentic and convincing.

It’s a jolly, easy enough read, bordering on the farce at times and that’s where I do have a little niggle because it was almost as if the book couldn’t make up its mind as to whether it was a labyrinthine mystery or a humorous romp. It tries to strike a balance between the two and there are moments where it works but there are a few tenuous passages were it seems to lose its way a little. There are some genuinly funny and witty moments, some delightful word play from one of the more caricatured characters on board the ship.

The author makes some things evident to the reader, or at least credits the reader with enough intelligence to work things out, but lets the characters flounder their way to some semblance of the truth. I always think that is a useful device that can bond a reader to the author. But there is much that requires unravelling at the end. It’s not a straightforward plot by any means.

However it’s an undemanding, easy read perfect for the summer even though it’s set in December!! Will I seek out Celia Imrie’s previous novels? Well, I wouldn’t snatch them out of your hand but they’ll remain on my radar to snaffle should the opportunity arise.
Posted by Bookphace at 16:08