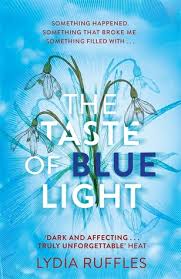 Although I’m too old to get away with being mistaken for a YA ! I do enjoy the genre very much. Maybe it’s because I’ve never really grown up. Guess I’ve left it a bit late now! But this debut fiction from Lydia Ruffles is all about growing up and how. With all the hallmarks of a debut novel, extravagant descriptions and images, the story is Lux’s. She is a seventeen year old at a seemingly exclusive boarding school for artists who haven’t fitted into mainstream education. The school has its own protocols and I saw it as a contemporary, fictional view of Summerhill maybe. As an intern at a gallery Lux has experienced amnesia regarding events following a party she has attended. Or so it seems. The story leads us through Lux’s tortured journey of self discovery and her attempts to recall exactly what happened to her. The twist is unexpected and quite a jolt to the senses. I don’t do spoilers so I can’t divulge it but it adds another dimension to the last quarter of the book which subtly changed the dynamic and opens the book up to a wider audience, less YA than AA - Any Age.

The main character, Lux Langley, is flawed, complex and human. She’s a paradox. There are aspects of her and her behaviour that you don’t like but come to partly understand and there are other aspects which endear her to you. The loyalty and steadfastness of her friends suggest she must be an okay kind of person, but a damaged one. Once the truth is revealed it puts everything in context. The book touches upon that state I guess we all find ourselves in at some point when something big happens and you feel you have lost your real self and long to find the real you again. It’s dealt with very well, and is very poignant and accessible.

The writing felt honest in its rawness and openness. There was a dreamlike quality to the descriptions at times that I thought was an attempt to verbalise the inner workings of Lux’s mind. She has some recurrent synesthesiac experiences both in her dreams and in her waking world which are vivid and emphatic for the reader and offers a variation to similar fictional self discovery novels. There are other recurrent images too which provide a relevance that unfolds as the story progress. I found the snowdrops especially attractive.

It’s a promising debut for sure. And if this writer continues to produce YA novels of this quality then we are in for a treat and it’s a good enough reason for me to give up trying to grow up!
Posted by Bookphace at 15:00