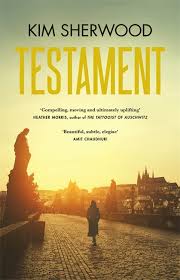 This book is immense. In every sense of the word. I fear that my words will not do it justice. And I apologise in advance. My thanks to Ana McLaughlin, Quercus Books and RiverRun books for the opportunity to read this. And I’m sorry I wasn’t in time for the Blog Tour!!

This is a debut novel!! What?! I’ve read a great number of debut novels over the years and I would say this is the least like a debut novel I’ve ever come across! The writing is of the highest quality. You don’t always get this quality of writing from established authors.! It has flow. It has intelligence and integrity. It has depth of language and meaning. It tells a story. It offers us insights and considerations and asks us to think. I enjoyed the arrangement of the book with the sometime enigmatic and almost epigrammatic chapter headings which if you take and run them together are almost poetic.  The chapters and the parts of the book are interspersed  with the questions that are part of the titular testament.

I’ve also read a great number of books about the Holocaust, both factual and fictional, and this story could be neatly compartmentalised into another Holocaust novel. Except that it is very much more. Yes, it tells us the story of two brothers who survived the Holocaust but what it does that seems to go further is that it examines the after effects on future generations putting the event into a contemporary perspective that I can’t recall other books of the genre doing it. That is another aspect that makes this book special. In fact there is a statement from the book that I cannot refrain from quoting ‘We are here because history doesn’t happen in the past tense.’

It’s a dual narrative structure with the historical narrative from the point of view of brothers Laszlo and Jozsef and the present narrative from the point of view of Eva, Joszef’s granddaughter. The brothers survived the atrocities but their attitudes towards their survival are polar opposites and the book delves into those attitudes and the knock on effect on future generations and how we are defined by our pasts and our ancestry. I am unwilling to offer much more in case I unwittingly offer any spoilers. But it does open up considerations of the lingering affects of the Holocaust right here,right now. I have often averred that I regard a writer who deals with a fictional treatment of the subject as brave. It’s not an easy subject. I’ve also always believed that through such books we maintain an awareness of what happened in those camps and on the death marches in the hope it will never happen again. This book ticks both those boxes. But it goes further. Somehow this writer has managed to strike a potent balance between the objective historical facts and a subjective emotional family fiction - a ficumentary if you will.

And as much as this is story of the Holocaust it is also a story of love and loss, seeking out truths and solving mysteries, dealing with trauma and tragedy and you might think that has to be obvious within the context of a Holocaust novel. But the human spirit endures and strives to deal with whatever tragedy or atrocity is forced upon it.

It doesn’t really need to be said how spirit crushing knowledge of the Holocaust is and if you’ve ever stood beside that single rail track running under the guard house at Auschwitz Birkenau and wept for those lost souls you find yourself longing for upliftment, for some solitary moment of optimism and I think you can get it from this book. How? Well, read it. And you’ll see.